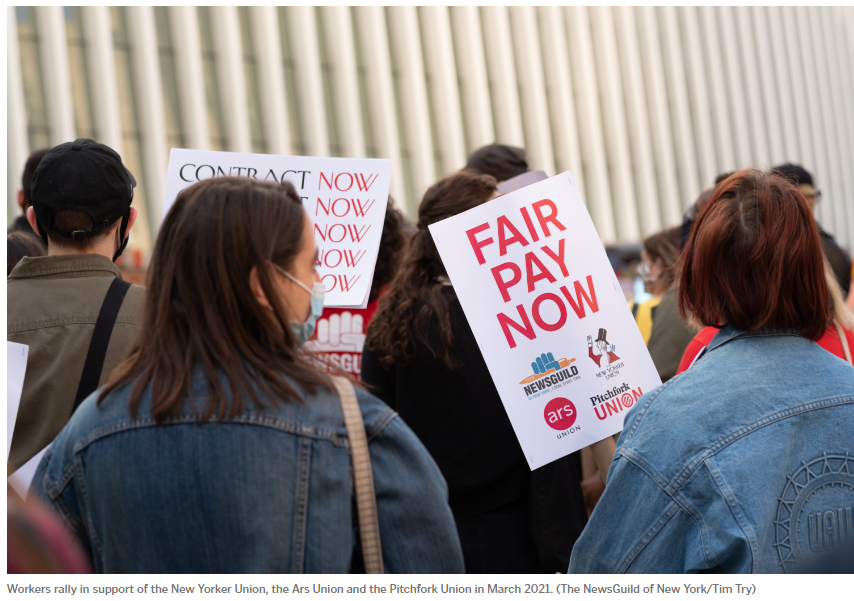 In the past decade, Workers at news publications have launched more than 200 Union Drives and more than 90% of them have been successful.

Media outlets have called it a “wave,” but it’s more than that, said University of Toronto Associate Professor Nicole Cohen.

And that movement has reached all areas of journalism.

In 2015 - which many point to as the start of this trend - Workers launched 20 Union Drives.

This year, Workers may more than double that number.

Last year saw at least 37 Union Drives where Journalists asked formally for Union Representation - and all of them were successful.

Workers this year have already organized at least 29 Union Drives in the first six months of 2021.

The data in this story primarily comes from National Labor Relations Board (NLRB) Election Reports spanning 2012 to 2021.

Unions are allowed to represent Workers through one of two ways - Voluntary recognition from the employer or an NLRB Election.

Unions that receive voluntary recognition have the option of filing paperwork with the NLRB.

Because this is not required, there does not exist a complete database of voluntarily recognized Unions.

In an attempt to capture some of that information, this story also includes data taken from a timeline created by the Cultural Workers Organize Project and press releases by the NewsGuild, the Writers Guild of America, East and the Screen Actors Guild-American Federation of Television and Radio Artists (SAG-AFTRA).

Not everyone who works in journalism is a Reporter, so the data also includes Union Drives by other groups, like Camera Operators and Tech Workers.

We’ve tried to include all Unionization efforts that have taken place at organizations that produce news in some capacity.

If we’ve missed any, please let us know.

Leaders at three of the largest Unions representing Journalists are unanimous - what’s happening now is historic.

“I started with AFTRA in 1995.  I can tell you what we’re seeing in the last five years is unlike anything I’ve seen before in terms of organizing,” said Mary Cavallaro, Chief Broadcast Officer of the SAG-AFTRA News and Broadcast Department.