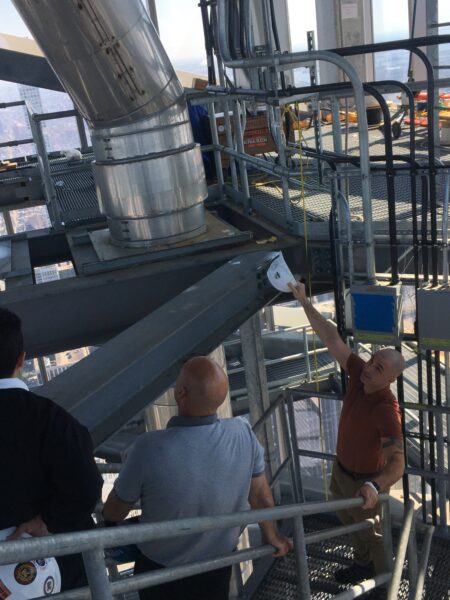 (NEW YORK CITY) - Stretching more than 1,400 feet into the sky, One Vanderbilt has been touted as the “most modern, up to date, technically advanced building” in 21st Century New York - and Local 28’s Tin Knockers are playing a huge part in bringing it all to life.

“They’re really not done drawing the building yet,” Sheet Metal Workers Local 28 Draftsman Michael Cusick says. “They’re really not. Things change - this probably changed numerous times.  We knew there was a window washer (unit) up here, but they never really know exactly where it’s going to be.  Things move around.”

Your ears pop riding the elevator all the way up to the “top of the house” where, Cusick 40, surveys a lot of the handiwork he’s performed over the last few years taking abstract mechanical designs and making sure they work in real world, three-dimensional space.

Local 28’s Michael Cusick talked about the challenges of designing and installing the network of ducts that run throughout One Vanderbilt.

The fourth tallest skyscraper on the island of Manhattan sits just west of Grand Central Terminal between 42nd and 43rd Streets and relies on intricate networks of highly precision metal ducts capable of distributing outside air to some 1.6 million square feet of interior office space - while at the same time also expelling huge volumes of excess heat built up in the heart of the structure’s enormous generators.

It’s the work of a Tin Knocker.

Local 28’s Sheet Metal Workers have been on the job here for the last three or four years.

About 30 to 40 Tin Knockers remain on the project that could last another year before completion.

The Tin Knockers worked throughout much of the Coronavirus Pandemic making sure One Vanderbilt continued to develop.

According to Local 28 Business Agent Ralph Tortora, roughly 15 to 20 of his Members actually came down with COVID: “Those were stressful times.  We did have a hard time with PPE (Personal Protection Equipment) at one point.”

Nevertheless, Foreman Matt Kennedy couldn’t wait to get back to work at One Vanderbilt after COVID forced a brief suspension of activity shortly after the start of the pandemic - even if new safety protocols meant a line stretching four blocks to access the site.

Local 28’s expert handiwork stretches all the way to the sky at One Vanderbilt.

“I wanted to come back to work,” Kennedy says. “There’s so much more to learn - I’m ready to build the rest of New York City.”

Despite the pandemic’s many hardships, One Vanderbilt managed to help launch Jonathan Aguilar’s career as a Local 28 Tin Knocker.

To Continue Reading This Labor News Story, Go To: www.laborpress.org/local-28-tin-knockers-ready-to-build-the-best-of-new-york-city/