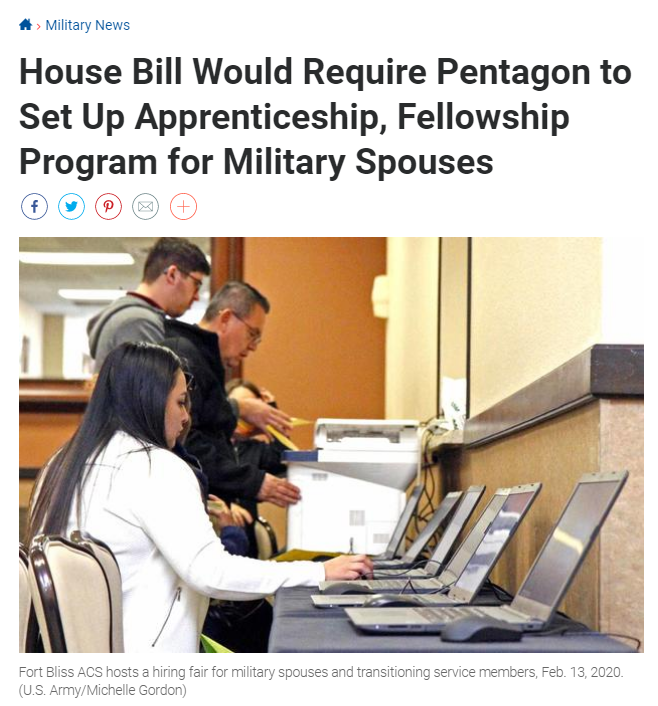 (WASHINGTON, D.C.) - House appropriators want to require the Pentagon to create a program that would give military Spouses more chances at landing Apprenticeships and Fellowships to jump-start or advance their careers.

The House Appropriations Committee's Defense Subcommittee has set aside $5 million for a pilot program for Military Spouse Internships and fellowships, according to a report released by the committee that details the Fiscal 2022 Defense Spending Bill.

The Bill does not specify what types of programs would be offered under the pilot, just that they should be able to show results such as Spouses being hired full time by either the place they intern or another organization in the same field.

The pilot would be overseen by the Defense Department's Director of Military Community Support Programs.

Unemployment and underemployment are common among Military Spouses, who face difficulties finding permanent jobs or advancing their careers as the result of bias in military towns against hiring Spouses, frequent moves and military training and deployments that affect family responsibilities and child care.

According to a report published earlier this year by the National Military Spouse Network, nearly one-quarter of Military Spouses actively seeking a job were unemployed before the COVID-19 outbreak, with rates likely increasing to between 30% and 35% during the pandemic.

Thirty-five percent of Military Spouses also reported that they are underemployed, meaning they are overqualified for the job they have, a situation attributed to the lack of "meaningful employment" at many duty stations.

Spouses stationed overseas faced even more challenges, according to the National Military Spouse Network - just one-quarter of all Military Spouses abroad said they looked for work, of those, 88% said they faced difficulties finding employment due to lack of opportunities, being overqualified, family obligations, or status of forces agreements that restrict employment.

The Draft Appropriations Bill is the first iteration of legislation that will be debated, amended and passed by the House before being reconciled with a version from the Senate.

It remains to be seen whether the proposed pilot will make it into the final version of the law.

But the Defense Subcommittee has said that, if it is approved, program eligibility would be modeled after the My Career Advancement Account, or MyCAA Scholarship Program, which provides up to $4,000 in funding for professional training or certifications and career counseling.

Those eligible for the MyCAA Program include the Spouses of Active Duty Service Members who are in paygrades E-1 to E-5, W-1 and W-2, or O-1 and O-2.

Spouses married to National Guard and Reserve Personnel are eligible if their military sponsor is on Title 10 orders.

Spouses whose husbands or wives died on active duty also are eligible.

To Continue Reading This Apprenticeship And Training Labor News Story, Go To: www.military.com/daily-news/2021/07/12/house-bill-would-require-pentagon-set-apprenticeship-fellowship-program-military-spouses.html