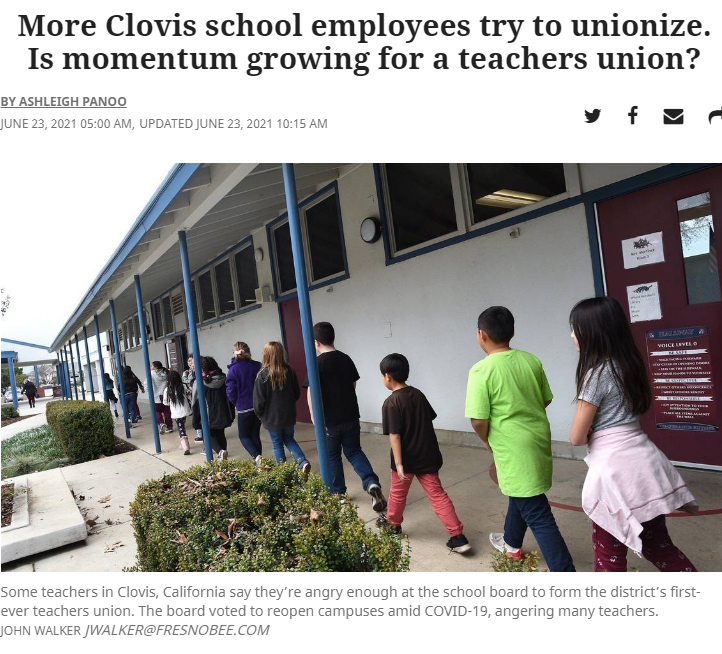 (CLOVIS, CALIFORNIA) - Clovis Unified School Psychologists (CUSD) have filed a petition to form a Union and Organizers call it a “first step” toward larger Unionization efforts pushed by Educators who are part of the largest district in the State of California without a Teachers Union.

A super-majority - about 75% - of the district’s 78 Psychologists signed the petition and it has been filed with the California Public Employment Relations Board (PERB), according to Organizer and School Psychologist Tamara Soemali.

“Once the Union support petition is certified by PERB, representatives from the Psychologists’ Union and the district will sit down and begin discussing issues and negotiating their first Collective Bargaining Agreement,” Soemali said in a statement.

She said the Coronavirus Pandemic has revealed how critical mental health services will be for students returning to school in the coming year.

“We are very proud to be paving the way for other Educators’ organizing efforts and call on the district to respect our right to organize and speak with a unified voice on behalf of the students we serve,” Soemali said.

In April, after months of organizing, Clovis Teachers went public with Unionization efforts, forming the Association of Clovis Educators (ACE) and attempting to gather enough signatures from colleagues.

Many Teachers said they felt excluded from the decision-making process during the Coronavirus Pandemic, spurring the change.

Another group of CUSD Teachers has been speaking out against unionizing. The Clovis Teachers for Clovis website urges the district to keep its faculty senate, which is the organization that represents teachers at the district level during decision-making. The senate works as more of an advisory panel and doesn’t have direct bargaining or negotiating power, organizers have said.

In early June, ACE filed an Unfair Labor Practice (ULP) claim against the district, alleging it stifled Union organizing by influencing and supporting the faculty senate for decades, despite a 1980s ruling that found the district violated the law.

ACE leader and Buchanan High School teacher Kristin Heimerdinger said pro-Union Educators are “absolutely anticipating that the Psychologists can step out into the lead and show people that really, there’s nothing to be afraid of (and) what results for them are positive changes that improve their working conditions and their ability to serve their students.”

Heimerdinger said organizers are not releasing to the public how many signatures they’ve collected so far.

As Summer has begun, efforts have slowed, but she expects it to pick back up when school is back in session in August.

“For us, it definitely is a step in the right direction,” she said of the smaller Union. “We appreciate that the Psychologists are kind of taking the lead on our Union Movement.”

To Read This Organizing Labor News Story In Its Entirety, Go To: www.fresnobee.com/news/local/education-lab/article252179368.html