Labor Perspective From College Journalism Student Phil Rosen: âWe Should Advocate For Trade Schools Just As Much As College, Especially After A Pandemicâ & âItâs Time To Talk About The False, Negative Stigma Around Trade Schoolâ 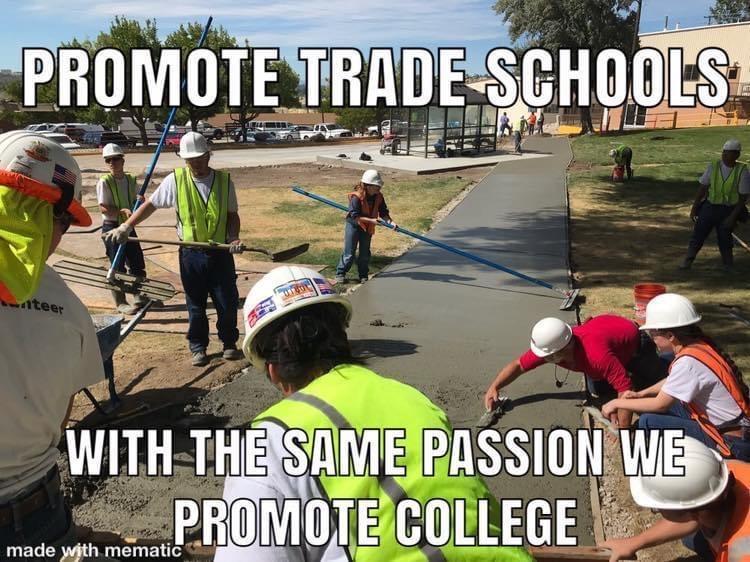 USC Anneberg Media Editor’s Note: Phil Rosen is a MS Journalism student (2021) with a background in kinesiology and philosophy.  He has spent time living in Hong Kong, Spain and Germany.

Most high school students are funneled into two- or four-year universities.

Little thought is given to other paths toward adulthood and schools and parents often fail to present alternative options.

The allure of a college degree has tarnished the reputation of Trade Schools.

During the economic downturn, Trade Labor continued expanding despite a volatile world.

The pandemic revealed just how much rests upon the shoulders of Skilled Trade Workers.

For students who may not know what they want to do, or if they merely want to try something other than college, Trade School offers promise.

Many Trade Workers collect far higher salaries than college-educated young adults - and, in some other countries, Trade School is popular and encouraged.

One reason high school conversations rarely gravitate to Trade School is, in part, because of the stigma that comes with not attending college, but forgoing college does not equate to failure.

In some cases it means better pay and better work-life balance down the line.

We should advocate for pursuing Trade School just as vocally as we praise the college-bound.

The assumption today is that, without college, you won’t secure a job that pays well enough to live comfortably or raise a family - but pursuing a traditional college degree should not be presented as an ultimatum or sole option because it stigmatizes other paths which may be just as viable.

Forcing students - or telling them they have only one viable path to follow - to subject themselves and their families to the cost of education is troublesome.

College does not make the most sense for everyone.

The upfront investment is high (College tuition has increased 213% in the last 30 years) and returns are not guaranteed.

Under-employment is a measure that determines if an individual is working in a job they are overqualified for.

For college grads, the under-employment rate is nearly 50%.

While college does not shield you from potentially working low-wage, physically demanding and labor-intensive jobs, the glowing adulation of a degree makes it seem like it could.

What’s more, Trade and Skilled Labor jobs fail to capture the attention or respect of those who attend college.

To Continue Reading This Labor Perspective, Go To: www.uscannenbergmedia.com/2021/07/02/we-should-advocate-for-trade-schools-just-as-much-as-college-especially-after-a-pandemic/?fbclid=IwAR2CZ-Edk9V5VuFcKM957B2g3y7dBPYmOrfM4Du8nbFPURB2ZoRL4oZHQOQ