One Medical Employees To âGo Unionâ - COVID-19 Pandemic âContributed To Feelings Of Burnout For Manyâ Workers In The Healthcare Industry & In Some Cases, Employees âWere Disappointed In Their Companies' Responsesâ 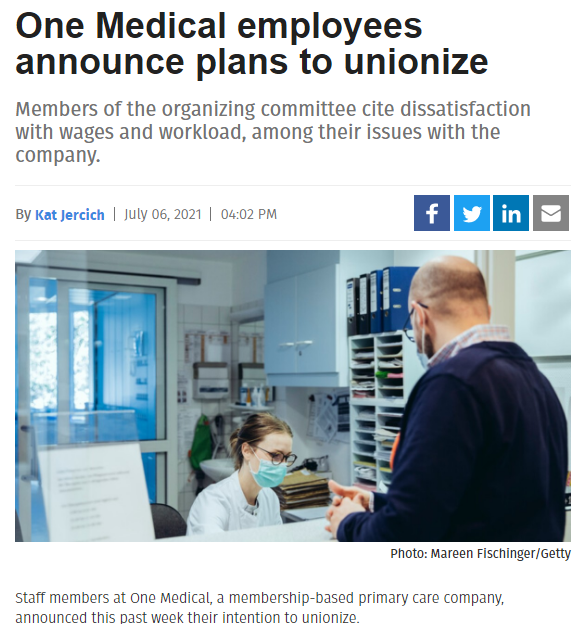 (SAN FRANCISCO, CALIFORNIA) - Staff Members at One Medical, a Membership-based primary care company, has announced their intention to Unionize.

"Each of us at One Medical pours our time, talent and energy into providing the best possible health care for our patients.  The Workers on the front lines of delivering this care have been at the center of our organizing process," wrote Members of the One Medical Workers Union Organizing Committee in an unsigned letter to One Medical leadership that was provided to Healthcare IT News.

A Workers United Representative said the committee has chosen to wait before surfacing publicly out of fear of retaliation.

"The experience of our patients is paramount in this effort," the letter continued. "Our Union will make it possible for us to continue providing the best primary care experience our country has to offer, and to take our organization to levels previously unseen."

A spokesperson for Workers United said the decision to organize stemmed from Workers' displeasure with wages, workflow and job demands.

For instance, said the spokesperson, Staff Members say they are "often misled" during the hiring process about the workload, complexity and level of responsibility the job entails.

The Workers United spokesperson said Employees also felt "severely underpaid" for the labor done, with salaries often below the living wage in their cities.

Given San Francisco's recent minimum wage jump, that hourly rate would be $22.36.

According to MIT's Living Wage Calculator, the living wage in San Francisco County for a single adult with no children is $28.

In the metropolitan area, which extends to Oakland and Hayward, it is $22.88.

The difference appears to vary from market to market.