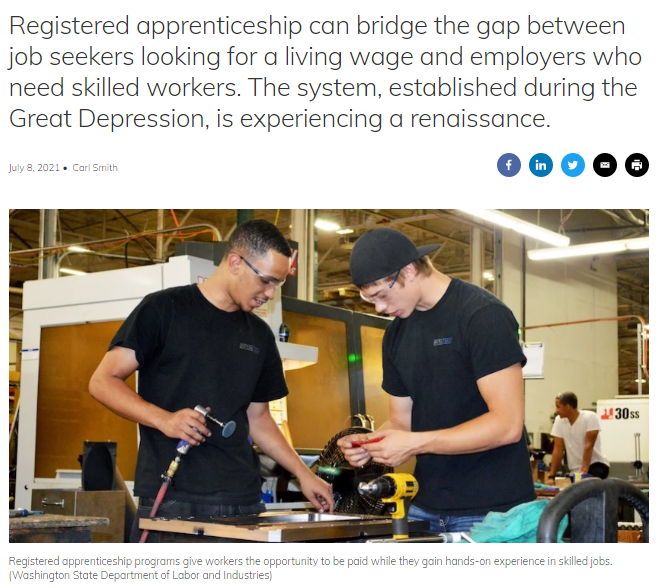 Registered Apprenticeship Programs give Workers the opportunity to be paid while they gain hands-on experience in skilled jobs.

Every state in the continental U.S. has fully reopened and 70% of the jobs lost in the Spring of 2020 have been recovered, but a mismatch between the needs of employers and the priorities, and supply of Workers is the bigger story.

Forty-six-percent of small business owners surveyed in June by the National Federation of Independent Business had job openings they could not fill, more than double the average over the past 48 years.

As many as 80% of employers contacted by the Conference Board say it’s difficult to find qualified Workers.

And a Pew survey found that two out of three Workers who became unemployed during the Coronavirus Pandemic are reconsidering their choice of work.

Job losses were more than twice as great for those in low income jobs as for middle income positions, and low wage Workers were shaken by the speed at which their jobs became disposable.

It’s not hard to understand that a low-wage job would offer small prospect of relief after the stresses of the past year.

For a family of four with one Working adult, a minimum wage salary is less than half the living wage in every state in the U.S.

If both parents work in minimum wage jobs, their earnings are still less than half what’s needed to meet basic needs in 19 states - and well below the cost of living in every other state.

An unprecedented combination of massive retirement rates, near zero growth in the working age population, declining workforce participation and lack of interest in “Blue Collar” jobs has created a situation that “could easily develop into one of the worst labor shortages of the last 50 years,” according to the Conference Board.

No Worker can be taken for granted at this juncture.

A system established to empower Workers as the country emerged from the Great Depression is helping today’s employers get the Workers they need and clearing paths to middle- and high-income jobs.

In the late 1930s, the U.S. experienced a shortage of skilled Workers.

Training programs provided by Labor Unions and large corporations had been disrupted by the Great Depression.

The Fitzgerald Act, known as the National Apprenticeship Act of 1937, established standards and responsibilities for Apprenticeships, with the aim of ensuring Apprentices received adequate training and had real opportunities for advancement.

The National Registered Apprenticeship Program that developed out of the Fitzgerald Act is overseen by the U.S. Department of Labor (USDOL) and is active in every state and territory.

It is administered either by the DOL or by a State Apprenticeship Agency and the directory for the National Association of State and Territorial Apprenticeship Directors includes members from 27 states, three territories and the District of Columbia.

Workers who graduate from Apprenticeships registered with the USDOL or a state agency earn an industry-recognized credential.

This is a significant distinction from company-run training programs, says Patricia Morrison, the Director of the Division of Registered Apprenticeship for the Virginia Department of Labor and Industry: “A company program may be perfectly fine and good, but if it’s not registered, Apprentices don’t get the same nationally portable credential.  They’re not really a Journey Worker.”

To Read This Apprenticeship And Training Labor News Story In Its Entirety, Go To: www.governing.com/work/states-expand-apprenticeship-programs-as-worker-shortages-grow