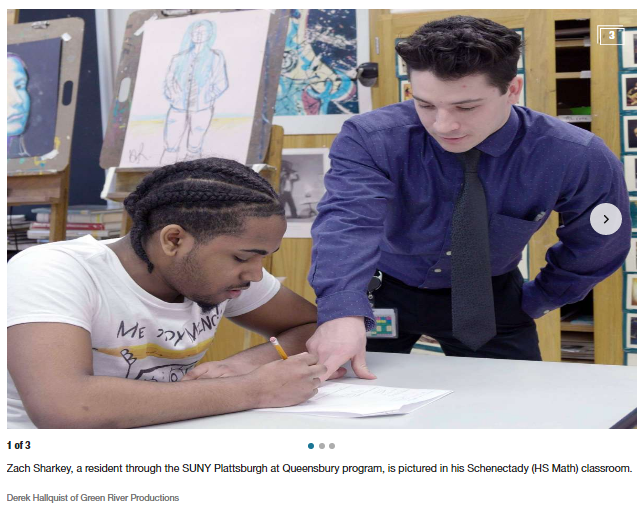 (ALBANY, NEW YORK) - A new Teacher Apprenticeship Program, which includes two years of on-the-job teaching experience, tuition assistance and a housing stipend, is looking to put an end to a continuing Teacher shortage being felt in the Capital Region, as well as statewide.

The program, called Classroom Academy, first launched in 2016, but this year it is officially recognized by the State of New York as an Apprenticeship.

Students in the program spend two years in a classroom with a Master Teacher, receive a $22,000-per-year living stipend and $5,000 in State University of New York Tuition Assistance toward their graduate degree, which they pursue while in the program.

The program is a partnership between New York State United Teachers (NYSUT), Washington-Saratoga-Warren-Hamilton-Essex BOCES, and local school districts and colleges.

“People couldn’t afford to spend the amount of time they needed to spend in the classroom (to be prepared to teach) for free,” said Colleen McDonald, the Program Coordinator for Classroom Academy at WSWHE BOCES. “We felt like there was a real barrier for a lot of people to come into teaching.”

In the Capital Region, subject areas like the sciences, special education and foreign languages are in need of qualified Teachers, said Superintendent of BOCES Jim Dexter.

And certain areas, like social studies, elementary education and Guidance Counselors, which used to have scads of applicants, are seeing less applicants as well, Dexter said.

The Coronavirus Pandemic has not had a significant impact on Teacher shortages in the Capital Region, Dexter said.

The shortages that exist now are due in part to many Baby Boomers retiring every year, a trend that has been happening for three to four years, Dexter said.

“I do think more Teachers retired because of the pandemic,” Dexter said. “A lot of Teachers were on the fence and they said ‘this is the year I’ll retire’ because they were already thinking about it.”

Connor Kuebler, a recent graduate of Classroom Academy, spent two years in a sixth-grade classroom at Oneida Middle School in Schenectady: “I learned more than I ever could have imagined.  I had expectations about what I might learn about lesson planning and whatnot, but I didn’t know what I did not know about classroom management, assessments, about using data to guide instruction, about differentiation.”

“I definitely wouldn’t be feeling confident about going into my own classroom if I had just had a standard (amount of student-teaching time),” Kuebler said. “I definitely feel ready after two years.”

To Continue Reading This Labor News Report, Go To: www.timesunion.com/business/article/First-of-its-kind-apprenticeship-program-aims-to-16269179.php?fbclid=IwAR0_VuwHoIJL6GX1jSzznWlQvOEDIcp7plm9j8kHwAPD-r6Xhje0h6Nfvvo