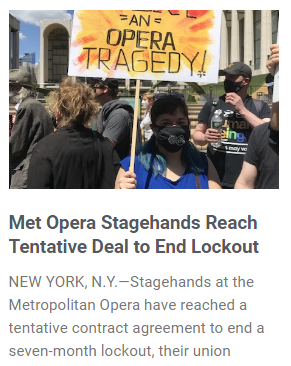 The Met’s Stage and Shop Crew Members voted overwhelmingly to recommend that the full Membership ratify the deal, International Alliance of Theatrical Stage Employees (IATSE) Local One said in the announcement.

The ratification vote is scheduled for Thursday (July 18th).

The Union will not release specific details about the contract until after that vote, a Local One spokesperson told LaborPress.

Local One said it was important to reach a deal this week, because otherwise the Met’s 2021-22 season, scheduled to begin on September 27th with the opening of Terence Blanchard’s Opera Fire Shut Up in My Bones, would have to be postponed or cancelled.

“Getting to this point required overcoming hard feelings due to the lockout of our Members and crafting some innovative solutions,” IATSE Local One President James J. Claffey Jr. said in the announcement. “We were coming down to the wire.  If talks had dragged on any longer it may have been impossible to prepare the opera house for a September opening.  This agreement makes it possible for the 2021-2022 opera season to begin as scheduled.”

The Met locked out the stagehands in December, saying it needed major concessions after losing more than $150 million in revenues from being closed since the COVID-19 Pandemic hit in March 2020.

It demanded their salaries be reduced permanently by 30%, equivalent to 20% of salary and benefits.

Claffey castigated management at a rally in May for delivering that demand with a “take it or leave it” attitude.

The lockout also closed the doors to the other IATSE Members among the Met’s 3,000 Employees: The Costume Designers, Tailors and Dressers of Local 764; The Box Office Workers of Local 751; The Hair and Makeup Artists of Local 798; The Broadcast Technicians of Local 794; and the Scenery Painters and Designers of sets, lighting, costumes and sound of USA 829.

“It would have been a new kind of opera tragedy if the Met remained closed,” IATSE International President Matthew D. Loeb said in the announcement. “But we’re not done yet. Our Union has many Members at the Met beyond those represented by Local One.  We need to make sure that their contracts are settled and their issues are addressed.”

To Read This Labor News Story In Its Entirety, Go To: www.laborpress.org/met-opera-stagehands-reach-tentative-deal-to-end-lockout/