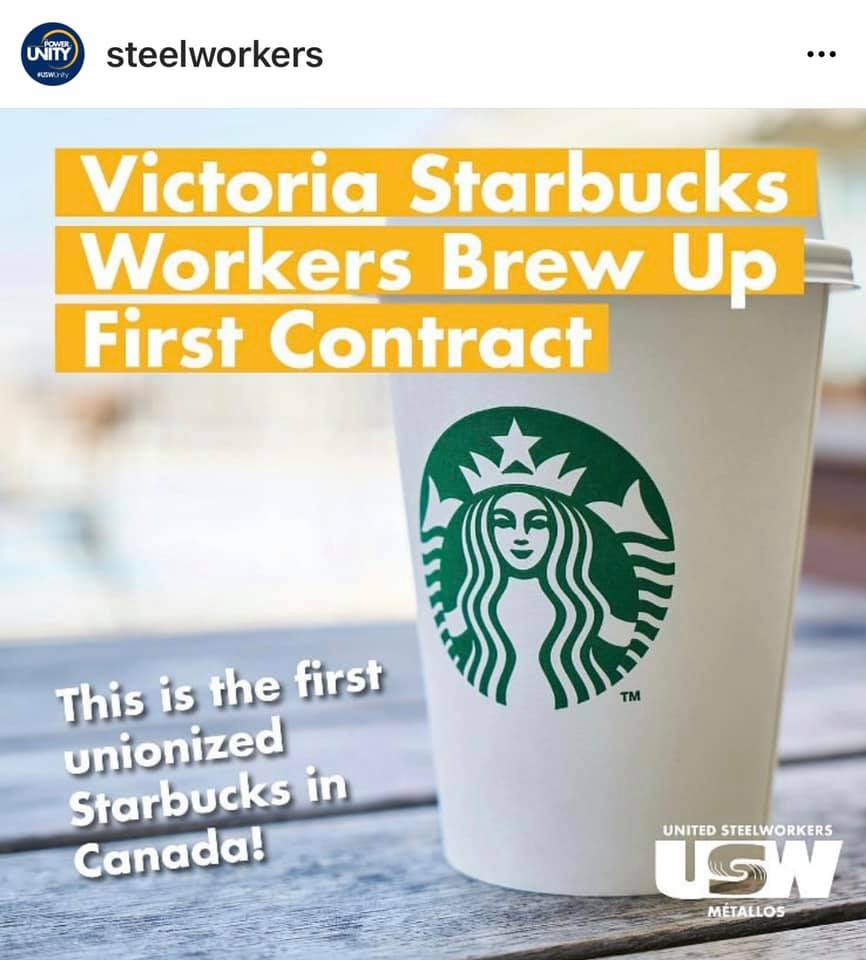 Staff at Canada’s sole Unionized Starbucks location have ratified their first three-year collective agreement - a rarity in a sector that traditionally has minimal Union Representation.

Last August, the Staff of a busy Starbucks drive-through in Victoria, British Columbia joined the United Steelworkers (USW), a Union that represents more than 225,000 Private Sector Workers in Canada.

Almost a year later, they have now achieved a contract that they say will not only raise wages - but also create a safer working environment, a major motivation behind their Unionizing Drive.

In the past, Workers at the outlet would often face harassment From Certain customers “for weeks and weeks and weeks” without receiving sufficient support from management, said Izzy Adachi, a Barista who helped start the organizing effort and UWS Bargaining Committee Member.

And over the past year, the Coronavirus Pandemic has only exacerbated this type of public abuse, especially over the mask-wearing mandate.

Now, Staff will be able to file grievances against management.

Izzy Adachi called this accountability measure the “biggest win” from the collective agreement: “I think that within the service industry, there is this idea that we’re supposed to let people take advantage of us or treat us poorly just because it’s ‘unskilled labor.’  I don’t see that as fair.”

The Collective Bargaining Agreement also increases Workers’ wages by up to $2.47 an hour, depending on length of service, and offers 10 paid days of leave for those facing domestic violence, doubling what British Columbia mandates.

And with the contract, this particular Starbucks outlet will only staff Unionized Workers and it is not allowed to work in other locations at the same time.

Izzy Adachi said the location is “so busy” that this restriction is unlikely to be a big issue and it could be eased once more outlets are Unionized.

On another front, there is growing interest from other Starbucks Workers across the country, said Stephen Hunt, who serves as Director of USW Western Canada.

But coffee shops have traditionally been difficult to organize because of their small Staff numbers and high turnover rate.

And at a big company like Starbucks, it would be time-consuming to Unionize one outlet at a time.

The Victoria drive-through is not the first Starbucks outlet in Canada to be Unionized.

A number of locations in British Columbia, Saskatchewan and Quebec had the same status in the 1990s and 2000s, but they all eventually decertified.

So far, it has brought in Staff from Matchstick Coffee and Cartems Donuts, two small Vancouver-based chains.

To Read This Organizing Labor News Story In Its Entirety, Go To: www.theglobeandmail.com/canada/alberta/article-bc-workers-at-canadas-only-unionized-starbucks-ratify-contract/