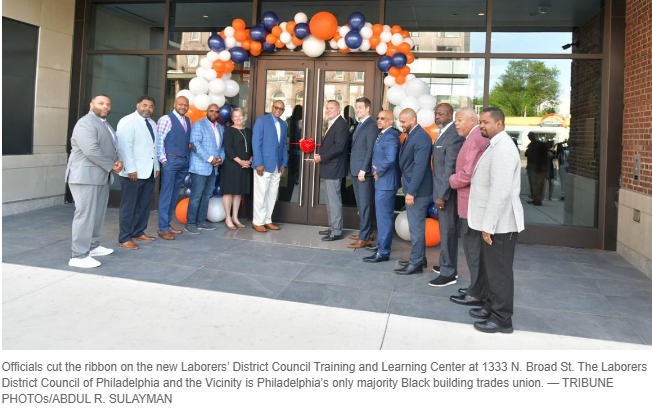 (PHILADELPHIA, PENNSYLVANIA) - Samuel Staten, Jr. feels a sense of pride when he walks through the doors of the new Laborers’ District Council Training and Learning Center.  His name graces the $30 million facility geared toward training the next generation of professional Construction Craft Laborers.

“It’s important that I see this school be successful,” Staten, who serves as Business Manager of Laborers’ Local Union 332 and as Vice President of Laborers’ International Union of North America, said as he recently spoke during the center’s grand opening ceremony.  I know that this is not a ‘Sam Staten, Junior’ building.  It’s a Laborers’ District Council building because I had partners.”

Community members, Construction Union Officials, elected officials, judges all turned out on for the grand opening ceremony hosted by the Laborers’ District Council of the Metropolitan Area of Philadelphia and Vicinity and Laborers’ Employers Cooperation and Education Trust (LECET).

The facility is at 1333 North Broad Street, at the site of the former William Penn High School.

Through a collaboration with Temple University, the center will increase the education and learning opportunities available to the surrounding community.

The building was supported by a $4.5 million Redevelopment Assistance Capital Program Grant from the state.

“I am also grateful and proud of what this building represents for the Laborers’ of Philadelphia and Vicinity District Council,” said Esteban Vera Jr., who serves as Laborers Local 57’s Business Manager. “This was a collaboration of the leadership here in the Philadelphia and a vision that we’ve had for quite some time - and today we’ve realized that vision that’s come to life.”

To Continue Reading This Apprenticeship And Training Labor News Story, Go To: www.phillytrib.com/news/local_news/laborers-district-council-opens-new-training-center-in-north-philadelphia/article_4174506a-bede-5ac5-a2dd-4907422c50bd.html