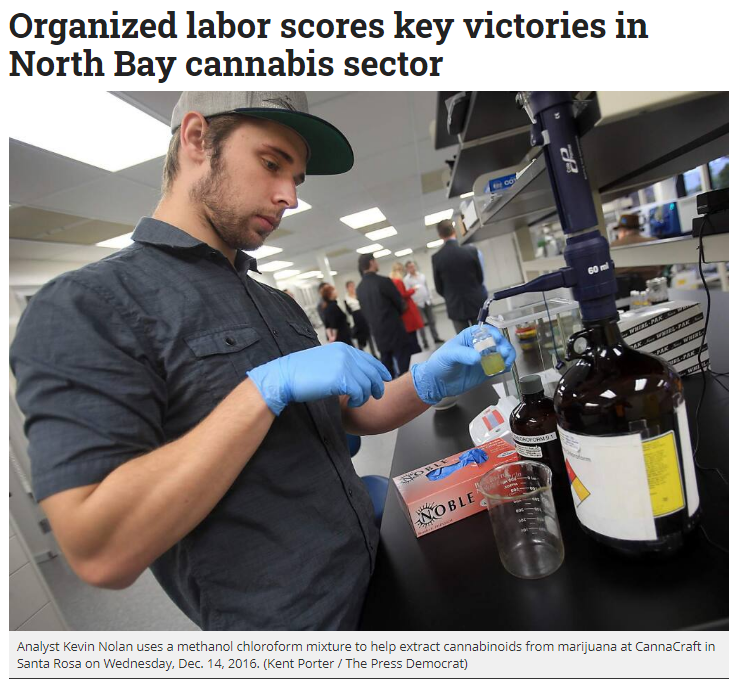 The United Food & Commercial Workers (UFCW) Local 5 has obtained recognition of 80 Manufacturing Workers at CannaCraft in Santa Rosa and 20 members at Sonoma Lab Works in Santa Rosa ratified their first contract - which marked the first time that has occurred at a California marijuana laboratory.

“It has been a very busy week,” said Jim Araby, Director of Strategic Campaigns for UFCW Local 5, the Hayward-based Union that represents about 500 Cannabis Workers across Northern California. “There’s more to come.”

The local progress has come as renewed Labor Organizing ramped up across the country during the Coronavirus Pandemic, most notably with the unsuccessful Unionizing Drive at an Amazon warehouse in Bessemer, Alabama.

But California Unions looking to organize in cannabis have an advantage under Proposition 64, the 2016 Ballot Initiative that legalized recreational marijuana use.

The referendum required any cannabis businesses with 20 or more Employees in the sector have to be neutral during a Union Organizing Drive and not engage in efforts like Amazon’s high-profile campaign in Alabama.

In fact, both local businesses were complimentary about the process.

“We’re Pro-Worker and Pro-Union.  Unions are about democratizing a workplace.  I think it’s all good,” said Tiffany Devitt, Chief of Government and Consumer Affairs for CannaCraft.

“We are pleased to have our Employees join UFCW Local 5 and fully support their decision,” said Darius Anderson, CEO of Kenwood Investments, in a statement. Kenwood Investment along with other investors acquired the Sonoma Lab Works in January 2019.

The UFCW - which has been among the most aggressive Unions in the state in organizing the sector - has focused mostly on retail cannabis outlets.

The two local drives mark the next step in organizing other parts of the state industry that was estimated to bring in about $4.4 billion in legal sales last year.

Under California Law, all cannabis has to pass specific testing requirements before it can be sold to the public, and that has given rise to specialty labs that conduct assessments on such factors as moisture content to heavy metals to ensure quality.

At Sonoma Lab Works, those Workers include Scientists, Engineers and Office Staff.

The contract gave the Workers annual wage increases and increased the vacation allowances and holidays that they will get off as well - as $500 bonus, Araby said.