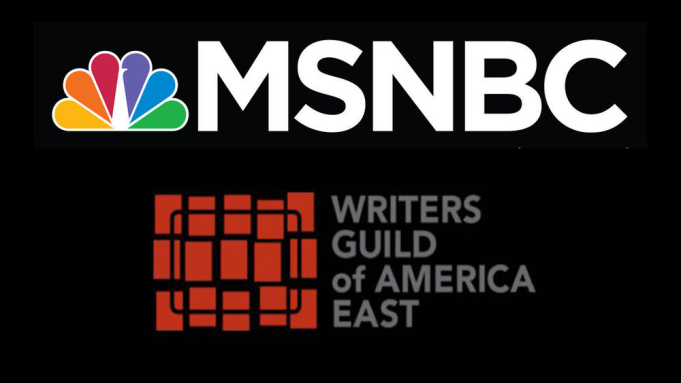 Two other shows - Zerlina, hosted by Zerlina Maxwell, and The Mehdi Hasan Show, which air on the Choice, an MSNBC-produced news channel on Peacock’s streaming service, also are included in the Organizing Drive.

WGA East says 204 of the 315-Member Bargaining Unit have signed a petition to recognize the Guild as their Bargaining Representative and that more are expected to sign up in the coming days.

MSNBC can voluntarily recognize the Guild as the Bargaining Representative for its Newsroom Staffs and begin contract negotiations or insist that an election be held that would be supervised by the National Labor Relations Board (NLRB) to see if a majority of the Employees really want to be represented by the Guild.

Lowell Peterson, the Guild’s Executive Director, called on MSNBC to recognize the WGA East voluntarily as the Bargaining Representative of the Newsroom Employees.

“We hope and expect MSNBC to remain true to its commitment to progressive values by respecting its Employees’ decision and recognizing our Union promptly,” he said. “We are proud that the hard-working Newsroom Employees at MSNBC decided to Unionize with the WGAE. They join thousands of their colleagues in the news and entertainment industries who recognize that collective bargaining is the most effective way to win a voice at work and to build sustainable careers.”

The Bargaining Unit also says it wants MSNBC to recognize the Guild and begin bargaining for a first-ever contract: “We are calling on the network to recognize our Union and we are looking forward to constructive negotiations over the issues that are important to all of us.  An overwhelming majority of our Co-Workers at MSNBC have signed a petition for Union Recognition to join over 7,000 Members of the WGAE, which includes thousands of Journalists working in cable, broadcast and digital media.  At a time when Journalists and journalism itself are under siege, we want to join our peers who have paved the road before us in standing up for our rights.”