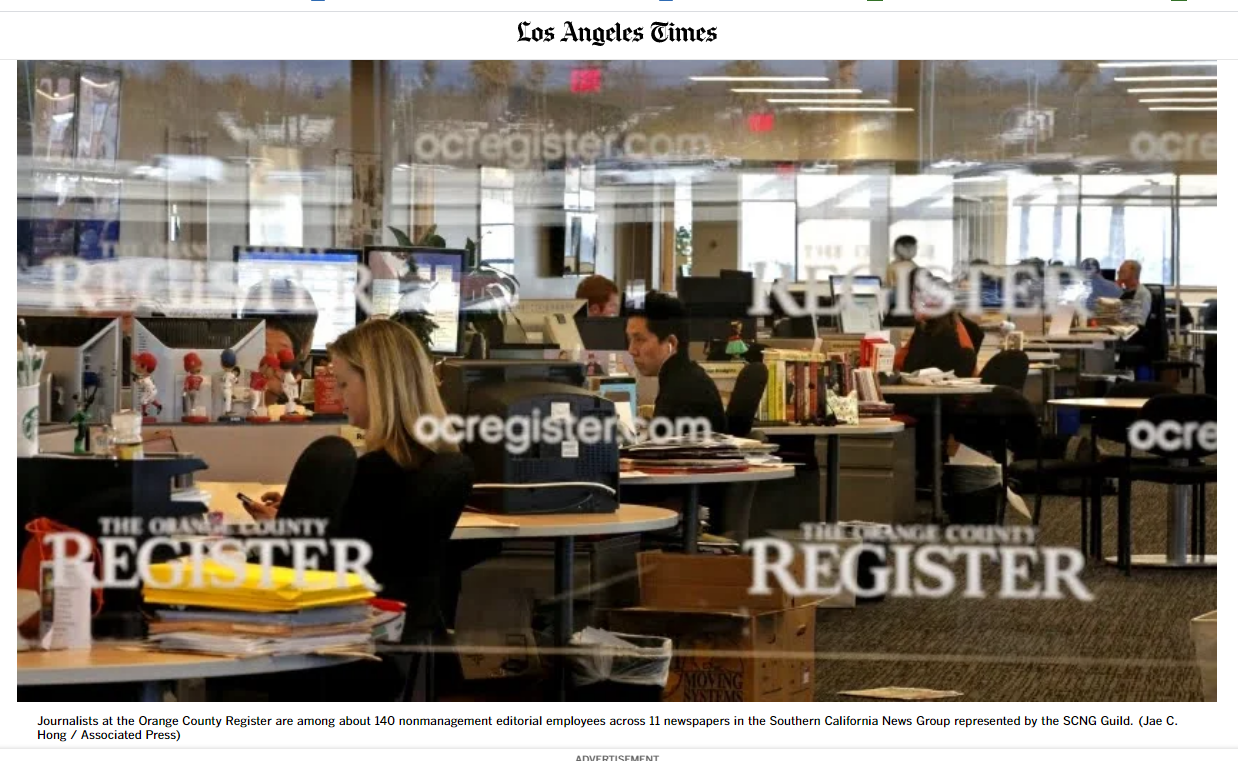 (SOUTHERN CALIFORNIA) - Staffers at 11 Southern California newspapers, including The Orange County Register, have voted to Unionize, joining a wave of newsrooms turning to Organized Labor amid job cuts and uncertainty in the newspaper industry.

The newspapers make up the Southern California News Group (SCNG), which is owned by Alden Global Capital - a New York Hedge Fund that has amassed one of the largest newspaper portfolios in the country, while aggressively cutting costs at its properties.

After a 64-to-19 vote, the SCNG Guild now represents about 140 Non-Management Editorial Employees at The Register, The Los Angeles Daily News, The (Riverside) Press-Enterprise, The (Long Beach) Press-Telegram, The (Torrance) Daily Breeze, The San Bernardino Sun, The Pasadena Star-News, The Inland Valley Daily Bulletin, The San Gabriel Valley Tribune, The Whittier Daily News and The Redlands Daily Facts.

The news group joins the Media Guild of the West, a local Chapter of the NewsGuild-Communications Workers of America (CWA), which represents Journalists at Media Outlets - including The Los Angeles Times.

The vote comes at a time of rising Union activity inside media organizations slammed by a waning print business and widespread competition for digital advertising and subscribers.

In the fast-changing newspaper landscape, Alden - which owns about 200 publications - has emerged as a power player, known for its acquisitions of properties including, most recently, The Chicago Tribune and The Denver Post, and its efforts to maximize its returns by quickly reducing costs.

“It’s a really great day for our Co-Workers and for everyone who works at these papers,” said Josh Cain, a Reporter for the SCNG and an Organizing Committee Member of the Guild. “We don’t agree with the way that this hedge fund is running things and we want a different path.”

The SCNG announced its effort to Unionize in February.

The group has been organizing quietly since 2018, when Alden began layoffs that slashed a third of the company’s workforce.

Hedge funds own half of the daily newspaper circulation in the United States by some estimates.

The move alarmed SCNG Journalists, who have seen their own newsroom budgets slashed in the years since Alden took ownership.

SCNG Editorial Employees haven’t had a Cost-of-Living raise since 2010, though inflation has increased by more than 20% nationwide, according to the Bureau of Labor Statistics (BLS).

Their vote is the latest in a wave of media organizations collectively organizing, fueled by concerns over consolidations, newsroom management issues and the industry’s general financial uncertainty.

Journalists at Insider, formerly known as Business Insider, and tech Workers at The New York Times Unionized with the NewsGuild in April.