âThese Gains Are The Direct Result Of Collective Actionâ - The New Yorker Union âReaches A Deal To Avoidâ A Strike, Agreement Includes Raises Of 10% For Most Staffers 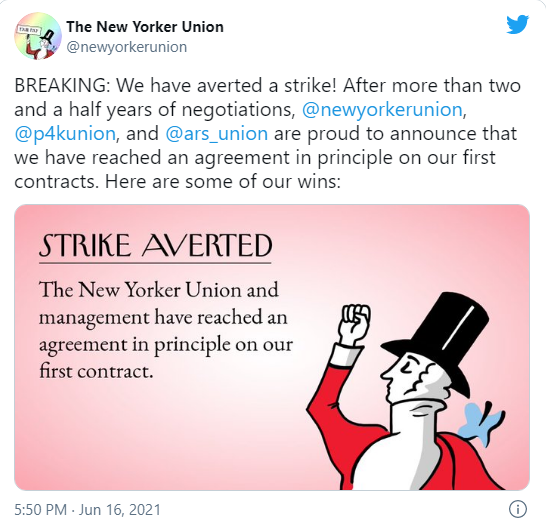 (NEW YORK CITY) - The New Yorker managed to dodge a work stoppage on Wednesday (June 16th) when Staff and management at the weekly magazine agreed to a first Union contract after two and a half years of negotiations.

The publication’s Staff Union announced on Twitter that it had brokered a tentative agreement with parent company Condé Nast to avert a Strike.

The Union, which is part of the NewsGuild of New York, said most Members would receive pay increases of at least 10%, while some would see raises of up to 63%.

The deal also includes language on job security, severance pay in the event of layoffs, a ban on non-disclosure agreements and a system to compensate Staffers for after-hours work, among other features.

No Members of the Bargaining Unit would be paid less than $55,000 per year, well above the $42,000 the NewsGuild said some Staffers had been earning.

Under the agreement, a committee will be established to work toward improving diversity among the staff, and at least half of the job candidates interviewed for open positions will come from underrepresented groups.

The union said it would never have reached such an agreement had it not threatened a strike.

“These gains are the direct result of collective action — including a credible Strike threat — proving that when we stand together and fight, we win,” the Union said on Twitter.

New Yorker Staffers had been negotiating in tandem with two other Condé Nast properties, Pitchfork Media and Ars Technica, which also reached agreements this week.

Any deals would still need to be formally ratified by Union Members.

The Union does not include the magazine’s high-profile Staff Writers and Contributors, most of whom are technically outside contractors.

Last week, the Union publicized plans for a virtual picket line if it failed to reach an agreement with the magazine’s leadership.

Members asked that, in the event of a Strike, readers not share links to New Yorker stories and contributors not pitch stories or handle edits to ongoing work.

To Directly Access This Labor News Story, Go To: www.huffpost.com/entry/new-yorker-union-deal-avoid-strike_n_60caa0eae4b0b80b49eb30ba