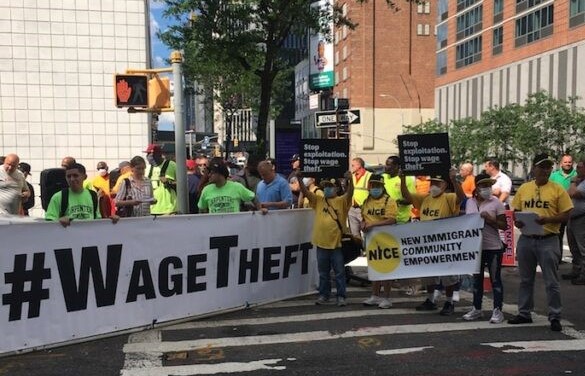 (NEW YORK CITY) - Two weeks after the Legislature passed a Bill intended to curb wage theft, about 200 Building Trades-represented Workers and supporters rallied outside a Manhattan construction project earlier this week to protest its using contractors that have records of wage theft, according to the Take It Back Campaign.

The measure, passed by veto-proof margins in the New York State Assembly and Senate on June 1st-2nd would hold general contractors on private construction jobs jointly responsible for wage theft violations committed by subcontractors on the site.

However, the Bill has not yet been sent to Governor Andrew Cuomo’s Office, A Legislative Staffer told LaborPress.

Sometimes Bills passed by the Legislature are not sent to the Governor until his office indicates that it’s ready to review them, which could be as late as December.

Cuomo’s Office did not respond to questions from LaborPress about when that might happen and whether he intends to sign the Wage Theft Bill.

Construction in the city is going through “a Worker-exploitation crisis,” Joe Scopo, Organizing Director for the Laborers Union’s Cement and Concrete Workers District Council 16, told those who attended the rally outside the Terminal Warehouse at 11th Avenue and West 28th Street.

“We’re up against greedy developers and contractors that are factoring wage theft into the bidding process and undercutting Union bids,” he said. “It’s criminal what’s going on out here in the construction industry.”

“This is why the Wage Theft Bill that just passed is so important,” said Rebecca Lamorte, former Legislative and Communications Coordinator at Greater New York Laborers-Employers Cooperation and Education Trust, now running for City Council on the Upper East Side.

A coalition of Union and Non-Union Construction Workers also rallied against wage theft at the intersection of 11th Avenue and West 28th Street this week.

The Terminal Warehouse, which covers the entire block between 11th and 12th avenues, was built in the 1890s.

To Continue Reading This Labor News Report, Go To: www.laborpress.org/construction-workers-protest-as-wage-theft-bills-are-delayed/