Alabamaâs Coal Miners âAre Striking For Their Livesâ â More Than 1,000 Miners At Warrior Met Coal Have Been On Strike Now For Over Two Months Now & âThe Conflict Is Only Heating Upâ 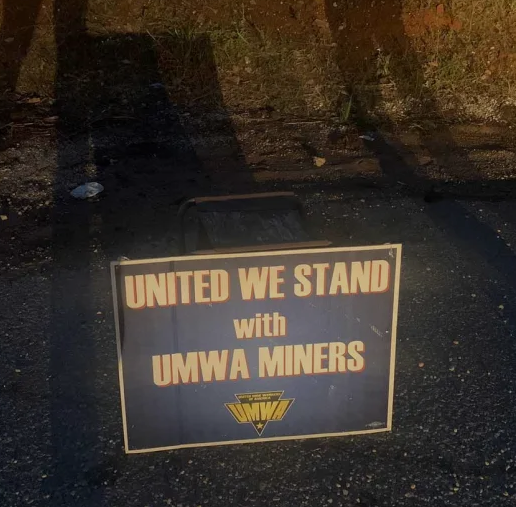 (TUSCALOOSA, ALABAMA) - Alabama is a beautiful place filled with contradictions and complexities, but there are a few things that my time there has taught me that this state holds sacred: God, football, and barbecue top the list, of course, but for a group of Coal Miners in Tuscaloosa County, there’s another hallowed institution perched up on that pedestal: the Union.

While Alabama itself may be a Right To Work (for less) State with a blood-red Republican legislature, its Labor Bona Fides run just as deep and its people are no strangers to organizing for the common good.

The Labor Movement in Alabama is tough, determined and nimble - it has to be, given what it’s so frequently come up against from Anti-Worker politicians and powerful corporations.

This past year, a high-profile Union drive at an Amazon warehouse in nearby Bessemer, Alabama captivated the Nation - but really, it shouldn’t have come as a surprise, given the area’s grounding in the Civil Rights Movement and its Unionized industrial past.

A few days after the sad results of the Amazon election were announced (and national attention turned back away from the Deep South), a small coal-mining community in the rural region between Birmingham and Tuscaloosa came together to launch one of the largest Strike actions in Alabama’s recent history.

On April 1st, 2021, 1,100 Miners at Warrior Met Coal in Brookwood pulled off their hard hats, hung up their reflective gear and walked off the job.

Their Union, the United Mine Workers of America (UMWA), had called a Strike - the first one to hit the state’s coal mining industry in four decades - and Workers knew what was coming because there’s a deep generational memory in these mines.

While many of this latest crop of Workers hadn’t been around or even alive the last time Coal Miners in the area went on Strike, their fathers, grandfathers and great-grandfathers surely were and passed down that knowledge to their kin.

The Union has been a part of life in those mines since 1890, when John L. Conley founded the UMWA’s District 20 in Alabama, which remains one of the most racially integrated UMWA Chapters in the country, where about 20% of workers are Black.

Crossing a picket line is a mortal sin here, an unthinkable betrayal that is enough to earn a permanent black mark on one’s reputation and standing in the community.

A hundred and thirty-one years later, the current members of District 20 are out on an Unfair Labor Practices (ULP) Strike against Warrior Met, citing the company’s conduct during negotiations - and have been for over two months.

It wasn’t initially expected to last this long.

About a week into the Strike, the company and UMWA Leadership came to a tentative agreement, but after it was presented to the Membership, they voted overwhelmingly to reject the offer and stay out on the picket line.

To Continue Reading This Labor News Story, Go To: www.thenation.com/article/economy/alabama-warrior-met-coal/