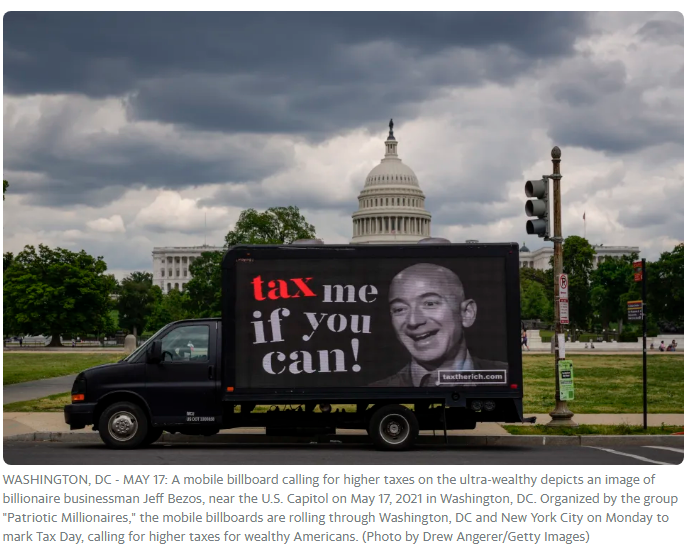 Yahoo Finance Editor’s Note: A mobile billboard (pictured above) calling for higher taxes on the ultra-wealthy depicts an image of Billionaire Businessman Jeff Bezos near the U.S. Capitol in May (2021) in Washington, D.C.  Organized by the group Patriotic Millionaires, the mobile billboards rolled through Washington and New York City to mark Tax Day, calling for higher taxes for wealthy Americans. (Photo by Drew Angerer/Getty Images)

The big takeaway in business news is that: A) Secretly released documents show billionaires aren’t paying their fair share in taxes.  (Gee, you think?)  And meanwhile, B) Hotels and restaurants and other businesses can’t find enough people to work as Maids and Dishwashers, etc.

If that doesn’t get your hmmm juices flowing, I don’t know what will.

Let me explain by first going through the A and B elements and then speak to how they’re connected.

Here’s a money sentence: “Taken together, (all the documents) demolishes the cornerstone myth of the American Tax System that everyone pays their fair share and the richest Americans pay the most.”

The main takeaways are: 1) The super wealthy, the .001%, make most of their money through the appreciation of property and especially stock, which isn’t taxed of course.  And that there are myriad means at their disposal to derive monies from these troves, like bank loans, so they can live high on the hog - tax free.  And 2) To the extent that they do have income, none of these billionaires are paying anywhere near the top marginal rate of 37% - thanks to loopholes and deductions - and in fact some have paid no taxes at all.

If you think these tax avoiders are all a bunch of rock-ribbed, Trump-loving Republicans, you are wrong.

Subjects include Warren Buffett, George Soros and Jeff Bezos, who are Democrats or lean that way.

In some instances, it appears they are paying huge amounts of taxes, but look again.

Check out this on Bezos from the ProPublica piece: “His tax avoidance is even more striking if you examine 2006 to 2018, a period for which ProPublica has complete data.  Bezos’ wealth increased by $127 billion, according to Forbes, but he reported a total of $6.5 billion in income. The $1.4 billion he paid in personal Federal Taxes is a massive number - yet it amounts to a 1.1% true tax rate on the rise in his fortune.”

ProPublica doesn’t even bother to calculate the rate he paid on his $6.5 billion in income.

The difference - the avoidance if you will - a cool $1 billion is enough to... well, maybe we should ask Bezos what he did with it.

To Continue Reading This Labor News Report, Go To: https://finance.yahoo.com/news/billionaires-pay-no-taxes-while-workers-get-no-raises-120116788.html