Amazon's âLabor Exploitation Is A Return To The 1920sâ And âUnions Are Our Best Hope Outâ - The Teamsters âRepresents More North American Logistics Workers Than Any Other Union & Amazon Is Enemy No. 1â 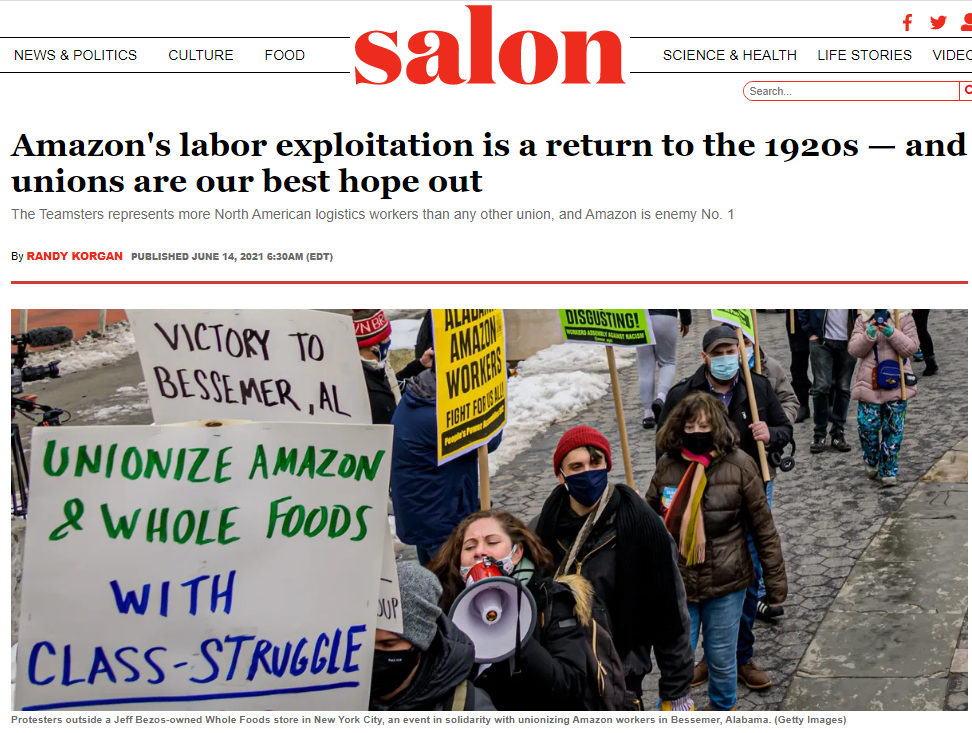 There is perhaps no clearer manifestation of how America is failing the Working Class than Amazon.

In the blink of an eye, Amazon has become the largest and wealthiest logistics company the world has ever seen.

The company will soon be the Nation's largest employer, redefining both the American Workforce and how people shop worldwide.

Amazon claims to be innovative, but its strategies of market dominance and labor exploitation are as old as capitalism itself and were perfected by predecessors like Standard Oil, General Motors, US Steel, AT&T, Walmart and Microsoft.

The International Brotherhood of Teamsters views this as history repeating itself.

The Roaring '20s were great for those at the top, but meant massive exploitation of Workers.

As we embark further into the 2020s, the Teamsters will make sure Amazon cannot repeat a history where workers suffered acutely to make ends meet and were frequently injured or even killed on the job while company executives stuffed their pockets with the profits.

Even before the 1920s, the Teamsters started building their Union, which is now the largest and most powerful organization of Workers in the North American logistics industry.

Teamster Members enjoy the best wages, benefits and working conditions in the industry because they've battled greedy owners and the politicians they have in their pockets, both in the streets and in the workplace.

As Workers, we have more in common than what divides us.

We speak and act collectively and the chorus of our voices and actions is more powerful than the sum of its parts.

Amazon Workers know they are the source of Jeff Bezos' billions and that’s because of their work he has become one of the richest people on the planet.

Just as Truck Drivers and other Logistics Workers built power on their own terms 100 years ago, Amazon Workers from Minneapolis to New York, from Chicago to California, are discovering their power and learning how to strategically wield that power to win their demands.

Amazon Workers are uniting to improve their livelihoods and the Teamsters are supporting them because they deserve what we have, and because we need to maintain the standards for which the Union’s Members have worked so hard.

Years of struggle against consolidated corporate powers have taught us that focusing on one facility at a time and depending on America's weak and hard-to-enforce legal procedures are insufficient to win against monopoly corporations like Amazon.

As we saw in the closely-watched National Labor Relations Board (NLRB) Election at Amazon's Bessemer, Alabama warehouse, the company is willing to violate the law and spare no expense to keep its Workers from forming a Union.

To Continue Reading This Labor News Story, Go To: www.salon.com/2021/06/14/amazons-labor-exploitation-is-a-return-to-the-1920s--and-unions-are-our-best-hope-out/?fbclid=IwAR1tYz4ixUkcUU_WKr5zoRiWjRRK6rrtL5ZOWKw1R2rQ174TAN4pYdilbFk