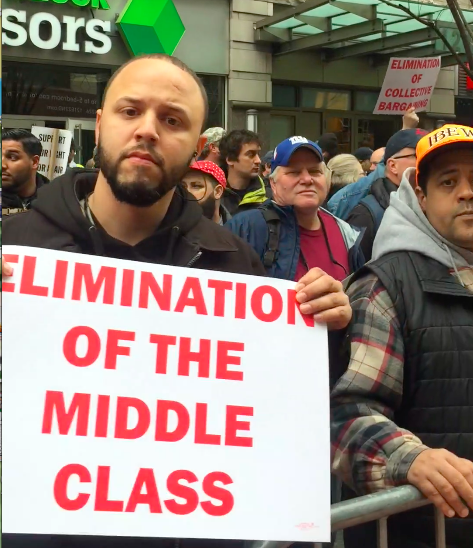 (NEW YORK CITY) - The NewsGuild of New York and International Brotherhood of Electrical Workers IBEW Local 3 are currently fighting a couple of very powerful corporations who view them like an invasion of the plague.  Not surprisingly, both Advance Publications and Charter Spectrum share top policymakers who are virulently Anti-Union.

The NewsGuild of New York, led by President Susan DeCarava and its Organizing Team, deserve much praise for their numerous organizing victories in the news publication industry, but organizing Workers to vote Union is one hurdle - getting a decent first contract is a whole other ballgame, especially, if you’re up against intransigent management taking orders from fiercely Anti-Union corporate executives and board members.

IBEW Local 3 Members, rebelling against Charter Spectrum’s onerous demands and refusal to bargain in good faith, went on Strike - which is now in its fifth year.

Companies like Charter Spectrum learned long ago, how to weather long strikes and to either temporarily or permanently replace Workers who dared to challenge their autocratic rule.

To secure a first contract, Members of The NewsGuild of New York/Communications Workers of America (CWA) Local 31003, have voted 98% to authorize a Strike against three Condé Nast publications: The New Yorker; ARS Technica; and Pitchfork.

Union protection for Journalists and other Media Personnel is critically important to promote journalistic integrity - as well as fairness, honesty and accuracy in reporting.

Conde Nast and its other publications, including Vogue, Vanity Fair, WIRED and GQ, are owned by Advance Publications.

Two fiercely Anti-Union Advance Publications executives behind the hard line being taken in negotiations with the NewsGuild are board members of Charter Communications.  They are Michael Newhouse, Co-President of Advance Publications and Steve Miron, a Senior Executive Officer of Advance and CEO of Advance/Newhouse Partnership, a privately-held media company headquartered in Syracuse.

So, how do you pressure top decision makers like Michael Newhouse, Steve Miron and key players like Condé Nast’s CEO Roger Lynch and influential Board Member Domenico DeSole who have the power and influence to assure Workers are treated fairly - including the right to being represented by a Union of their choice?

The Unions have to set the ground rules as to how, when, where and around what issues the Labor battles will be fought.

To Continue Reading This Labor News Story, Go To: www.laborpress.org/confronting-power-with-power/