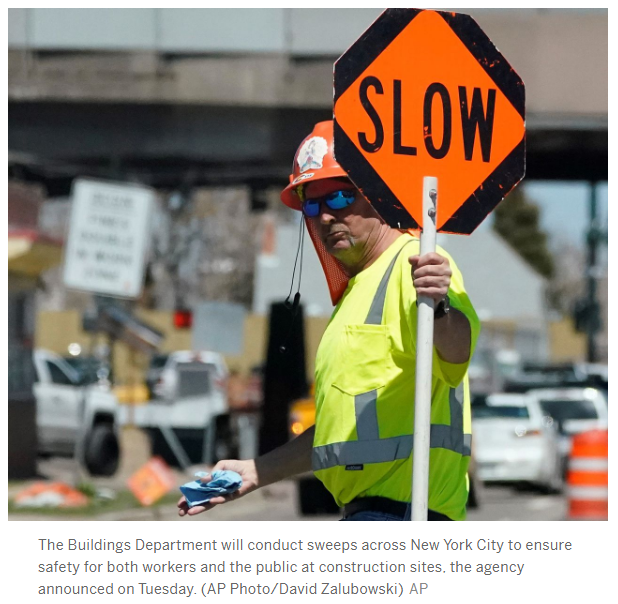 (STATEN ISLAND, NEW YORK) - The New York City Buildings Department (DOB) will conduct zero tolerance sweeps across the five boroughs to ensure safety for both Workers and the public at construction sites, the agency announced this week.

While performing the sweeps, DOB Inspectors will issue enforcement actions, including shutting down sites, if they observe any safety violations.

Contractors who are found to be putting their Workers at risk could face penalties up to $25,000 for each construction safety violation.

Inspectors and Community Engagement Teams will also be distributing “Worker Alert” safety information at construction sites about the dangers of Worker falls, which have been highlighted over the last two weeks when three Construction Workers in New York City lost their lives in separate work-related incidents.

Two of these fatal incidents were the result of Worker falls, said DOB.

“The recent spate of Construction Worker deaths in our city is tragic, senseless - and even worse, entirely avoidable,” DOB Commissioner Melanie E. La Rocca said. “Department Inspectors have been directed to sweep work sites around the city and unsafe conditions will be met with zero tolerance.  The death of even one Construction Worker is wholly unacceptable.”

She said DOB Inspectors will be conducting site visits at thousands of construction work sites in neighborhoods across the city.

If adopted, these Bills would “greatly enhance oversight and accountability on construction sites in our city by licensing general contractors who perform construction work, requiring more site safety supervision at larger work sites, strengthening requirements for cold-formed steel construction, and permanently banning the dangerous use of stand-off brackets for suspended scaffold work,” the DOB said in a written statement.

To Directly Access This Labor News Story, Go To: www.silive.com/news/2021/06/nyc-to-conduct-zero-tolerance-sweeps-at-construction-sites.html