âWe Are The Delivery Workers Who Kept Many Businesses Afloat. We Think We Deserve Essential Protections.â - New York City Deliveristas Rally For âBetter Pay & The Right To Use Toiletsâ 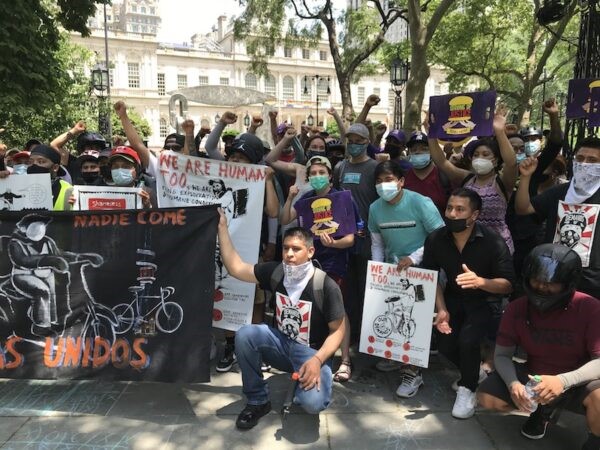 (NEW YORK CITY) - Arrayed behind a phalanx of red, blue, and purple electric bicycles, several dozen Workers for App-based food-delivery companies and supporters rallied in City Hall Park earlier this week, calling on the New York City Council to pass a six-Bill package intended to improve their pay and working conditions - including one that would require restaurants to let them use the toilet when they’re picking up orders.

“The restaurants we work with should allow us to use their bathrooms,” Mamadou, a 32-year-old Immigrant from Mali who preferred not to give his last name, told LaborPress before the rally, which was organized by the Workers Justice Project’s Los Deliveristas Unidos Campaign.

That’s the worst part of the job for women, especially in the Summer when you have to drink a lot of fluids, added Pepe Jhonson, a Togolese Immigrant who lives and works making deliveries in the Bronx.

The six Bills also include a measure that would set minimum per-trip payments for the “Deliveristas,” the heavily Immigrant Workers who deliver food for Apps such as DoorDash, GrubHub, Relay and UberEats.

Others would require App companies to pay Workers at least once a week and not charge them fees for collecting their wages, mandate App companies and restaurants disclose how tips were divided and enable Workers to turn down too-long trips without being “deactivated” by the Apps.

“We are the Delivery Workers who kept many businesses afloat,” Deliverista Gustavo Ayche told the rally, speaking in Spanish. “We think we deserve essential protections.”

“Delivery Workers have been feeding us, but the App companies have been starving them,” said City Councilmember Brad Lander (Democrat-Brooklyn), sponsor of the Minimum Trip-Fee Bill. “These are not folks on a side hustle.  They are working full-time.”

During the Coronavirus Pandemic, he added, UberEats increased its cut of what customers pay from 11% to 14%, and DoorDash’s revenue quadrupled.

The pay is a major complaint for Deliveristas.

They get paid a flat fee per trip - $7 in Manhattan, $4-to-$5 in the Bronx - say Mamadou and Jhonson, and, because the App companies define them as Independent Contractors, they get nothing when they’re not on a trip.

The Apps also sometimes keep tips or round the Workers’ share down, such as from $5.65 to $5, Gustavo Mancilla told the crowd, and UberEats has a feature that enables customers to modify or cancel tips within an hour after delivery.

They are a requirement for the job.

“The Apps are not transparent,” he said.

To Continue Reading This Labor News Story, Go To: www.laborpress.org/nyc-deliveristas-rally-for-better-pay-and-right-to-use-toilets/