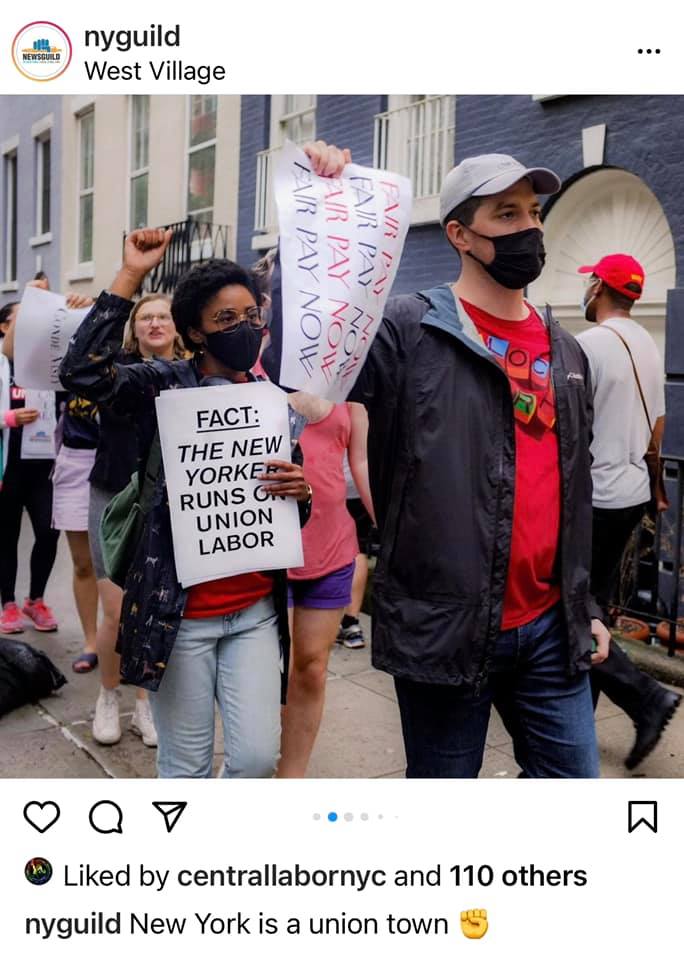 (NEW YORK CITY) - On Monday (June 7th) morning, Union Employees at The New Yorker unveiled a website that included their demands for higher pay and better job security, as well as the statement that they were “on the verge of a Strike.”  The next day, on Tuesday evening, the Employees marched from the campus of New York University to the nearby Greenwich Village home of Anna Wintour, the Fashion Icon, Magazine Editor, Publishing Executive and Manhattan power player who has become a symbol of Condé Nast, the corporate home of The New Yorker.

There were about 100 Protesters in all, many of them Fact Checkers or Editorial Staff Members who belong to The New Yorker Union, a group that started three years ago and is affiliated with the NewsGuild of New York.

The demonstrators included Employees from two other Condé Nast publications with Union representation - the digital publications Ars Technica and Pitchfork.

A few Police Officers looked on as the Protesters marched in a loop outside Wintour’s darkened townhouse on the otherwise serene block of Sullivan Street.

They carried signs that read: “You can’t eat prestige” and “Fair pay now” in The New Yorker’s distinctive typeface.

Genevieve Bormes, an Associate Covers Editor at The New Yorker, said she made $53,000 annually after working at the magazine for more than five years.

Her salary was $33,000 when she started in 2016, she said, adding that the wages offered by the magazine favored Workers who had a financial cushion.

“People from a range of backgrounds can’t afford to work there,” Bormes said.

The protest was a sharp escalation in The New Yorker Employees’ two-year fight with Condé Nast over wages, health care benefits and work-life issues.

The company had tried to stave it off in a Monday night e-mail to Union Employees that said: “Targeting an individual’s private home and publicly sharing its location is not acceptable.”

The Union replied with an e-mail accusing the company of “what looks like an unlawful attempt to discourage protected concerted activity.”

Talks between The New Yorker Union and Condé Nast started at the end of 2018, shortly after more than 100 Copy Editors, Fact Checkers and other Employees organized with the NewsGuild.

Some New Yorker Workers make as little as $42,000 a year, according to the Union, which is seeking a base salary of $60,000 for its Members.

In recent bargaining talks, the company offered a floor of $54,500, according to Natalie Meade, a Fact Checker and Chair of the NewsGuild’s Unit at the magazine.

To Read This Labor News Story In Its Entirety, Go To: www.nytimes.com/2021/06/08/business/media/new-yorker-union-anna-wintour.html