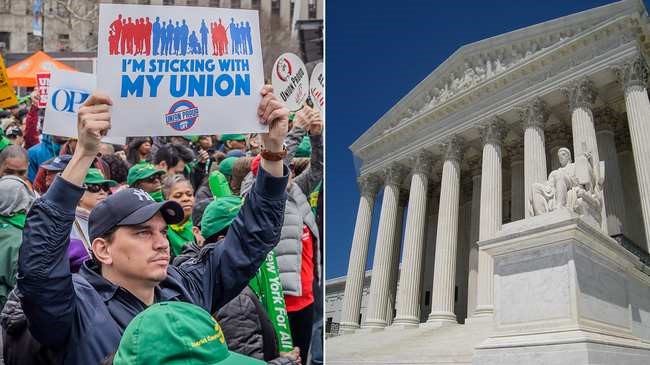 (WASHINGTON, D.C.) - The U.S. Supreme Court has turned away a bid to weaken the power of Public Sector Unions, refusing to reconsider a 1984 ruling that lets them serve as the exclusive Bargaining Agent for Workers.

The Justices - without comment, rejected an appeal by Jade Thompson, an Ohio High School Teacher who said she has a First Amendment right not to be represented by a Union.

The appeal was one of the first to test the Court’s appetite for Labor issues since Justice Amy Coney Barrett’s confirmation in October created a 6-3 Conservative majority.

In rebuffing Thompson, the Court’s Conservative Wing passed on a chance to extend a 2018 ruling that said Government Employees can opt out of paying fees to a Union to cover the cost of collective bargaining.

A Federal Appeals Court ruled against Thompson, even while saying the exclusive-representation requirement couldn’t be squared with the reasoning of the 2018 decision.

In writing the 2018 ruling, Justice Samuel Alito said designation of a Union as an exclusive Bargaining Agent “substantially restricts the non-members’ rights” - but the 5-4 opinion didn’t mention the 1984 precedent, known as Minnesota State Board v. Knight, or directly say it might be in jeopardy.

To Directly Access This Labor News Report, Go To: www.bloomberg.com/news/articles/2021-06-07/supreme-court-rejects-bid-to-weaken-public-sector-labor-unions