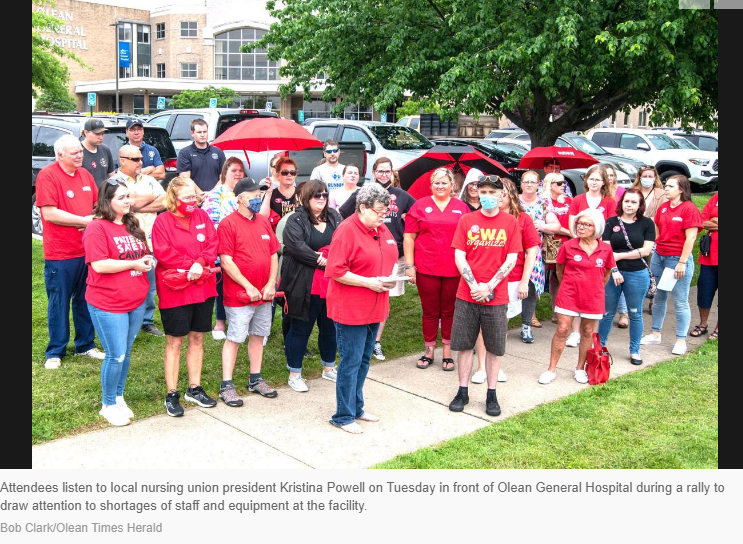 About 50 people attended a rally that took place in front of the hospital, including current and former Staff, Representatives from the New York State Nurses Association (NYSNA), Communications Workers of American (CWA) Local 1168 - who traveled down from Buffalo, and members of other area Unions, including City Firefighters.

“We are here for our patients - that is our concern.  We need Staff and equipment,” said Kristine Powell, a Nurse in the Emergency Department who also serves as President of the local NYSNA Union.

The facility is facing an influx of patients, as more patients are seeking care after delaying care for more than a year due to the Coronavirus Pandemic, and because nearby Bradford Regional Medical Center has reduced services, Union Reps said.

The Nurse Staffing shortage is hitting the Emergency Room, Intensive Care Unit (ICU) and Medical/Surgical floors especially hard, Union Reps said.  In the ICU, Nurses are sometimes caring for three or even four patients, when the safe standard is one or two, they said.

On a recent night shift, the Unions said, an ICU Nurse was training and orienting a new Nurse at a time when there were eight critically ill patients to care for - which is a “a recipe for disaster,” the Union said.

Nurses are working an unsustainable amount of overtime to ensure their patients are cared for, but they worry that soon, patients will need to be diverted to other hospitals, they warned.

Although hospital administration has made efforts to solve the Nurse shortage, Nurses insisted during the rally held on Tuesday that “it’s not enough.”

As such, the Unionized Nurses are demanding Olean General Hospital invest the resources to recruit and retain Nurses in order to fulfill their commitment to care for the community.

The rally was held the week after hospital leadership told The Olean Times Herald they had hired 31 Nurses since April and are urgently seeking still more Staff for the hospital.

For starters, she said, 22 of the new Nurses are fresh college graduates who performed their senior years during the pandemic - limiting their clinical experience before entering the workforce, meaning they will need on-the-job training to get up to speed.

“They won’t be ready until August or September - assuming they pass their boards,” Powell said. “How am I supposed to take care of my patients and share my experience?”

As new hires were made, she added that retention has been a major problem - with 15 Nurses leaving in recent months.

“We need to have more RN (Registered Nursing) recruitment and retention,” she said, insisting that administrative actions have done little to address long-standing complaints of understaffing that predate the COVID-19 Pandemic.

For More On This Labor News Story, Go To: www.oleantimesherald.com/news/nursing-union-more-staff-equipment-needed-at-olean-general-hospital/article_391fcf32-9634-553f-9538-10b6b9bc70ef.html