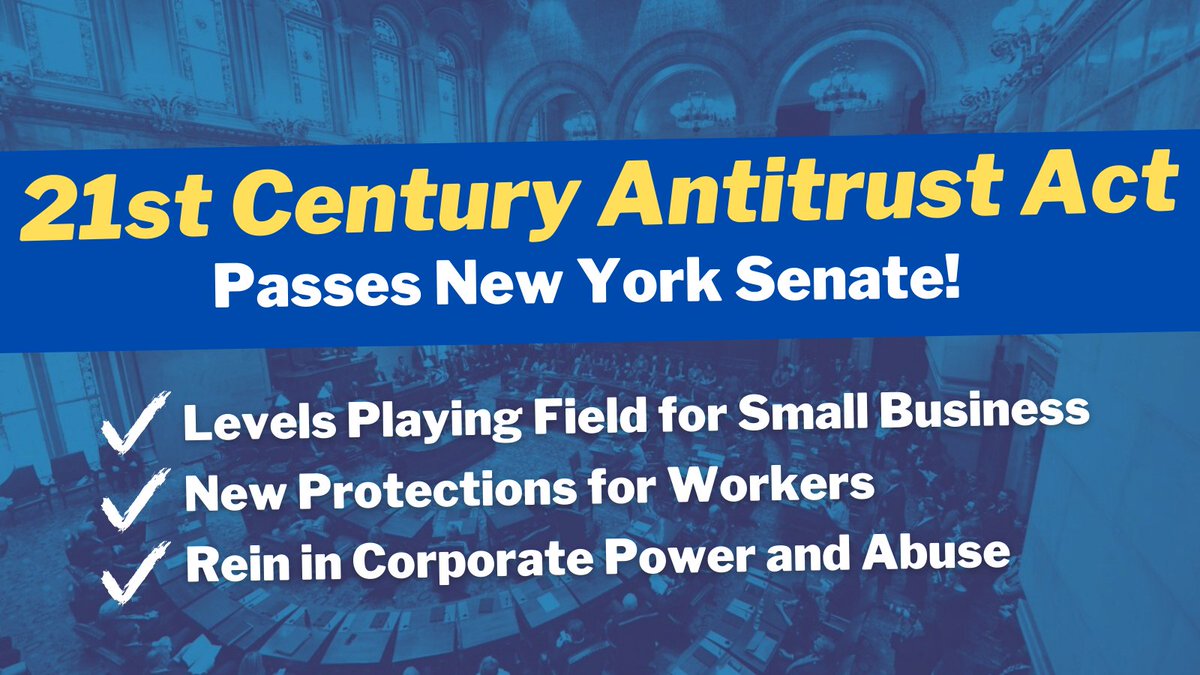 (ALBANY, NEW YORK) - As the New York State Senate passed historic legislation Monday (June 7th), a broad coalition of Labor Unions, industry associations, Workers and small business owners praised the Senate’s approval of the Bill and called on the New York State Assembly to vote on the 21st Century Antitrust Act before the legislative session concludes at the end of the week.

The closely-watched vote on the New York legislation is helping build momentum for similar action currently under consideration at the Federal level.

Authored by State Senator Michael Gianaris and Assemblyman Jeffrey Dinowitz, the sweeping reforms in the 21st Century Antitrust Act would simplify and strengthen New York’s Anti-Monopoly Laws and would expand what kinds of harmful conduct the law can address.

Among other measures, the Bill would: Lead to clear, bright-line rules prohibiting abusive and anti-competitive tactics by dominant corporations; Place New York at the cutting edge of combating monopolies and curbing corporate power by fundamentally redefining what constitutes dominance by a single firm; and Allow actions against corporations that act unilaterally to stifle competition - an expansion of current Law which defines anti-competitive conduct as occurring only when two or more companies are collaborating or conspiring to restrain competition.

For New York’s thousands of Workers, it would protect them from outsized labor market power by ushering in vast new protections for Working People - the Bill would effectively stop the use of non-compete and no-poach clauses in Employee contracts by exposing any company that uses such clauses to abuse-of-dominance enforcement.

And it would safeguard consumers by helping to restore free and fair competition across the state.  Dominant companies such as Amazon have long wielded their concentrated market power to box out small businesses and harm consumers.  By allowing those harmed by anti-competitive conduct to sue as a class, consumers and small businesses would gain the ability to band together to sue dominant firms for engaging in abusive conduct.

The 21st Century Antitrust Act is the most progressive Anti-Trust Legislation in the country.

As both the U.S. House and Senate take steps to rein in the outsized power of Big Tech and other monopolies, New York can be a model for these Federal actions - leading the way and setting the tone for upcoming Anti-Trust Legislation in other states and at the Federal level.

“Our Anti-Trust Laws were written a century ago for a radically different economy and they are in desperate need of reform,” Senate Deputy Leader Michael Gianaris said. “Corporate power has reached unprecedented and dangerous levels, and we need powerful new laws to protect the public and our economy.  I am pleased the Senate is taking this historic step and I look forward to this landmark legislation passing the Assembly and becoming Law.”

Several Members of the coalition expressed their support for the 21st Century Antitrust Act:

Retail, Wholesale and Department Store Union (RWDSU) President Stuart Appelbaum: “Once again, New York State is leading the way and showing that it is beyond time to rein in anti-competitive companies like Amazon.  The Twenty-First Century Anti-Trust Act is an important step towards protecting Workers and many of the good Union jobs in our communities.”

Teamsters Joint Council 16 President Thomas Gesualdi: "It’s about time Anti-Trust Laws were updated to hold dominant corporations accountable for degrading wages and working conditions that Union Members have fought for in industry after industry.  Our Members see the need for this legislation every day on the job, as companies like Amazon grow by under-paying and over-working their Employees.  Without strong Anti-Trust Laws, good employers either have to come down to Amazon's level or lose business.  The Teamsters thank Deputy Majority Leader Gianaris and the State Senate for their leadership in passing this Nation-leading legislation and call on the Assembly to pass it as well before the session ends this week."

ALIGN Executive Director Maritza Silva-Farrell: “For too long, big corporations like Amazon have used their outsized economic and political power to abuse and bully Workers, small businesses and communities.  Monopoly power has led to waves of small business closures while Workers are squeezed in a race-to-the-bottom economy.  We must stand up to abusive corporate agendas that benefit the wealthy few while leaving our communities to suffer.  The Twenty-First Century Antitrust Act is the most aggressive Anti-Trust Legislation in the country, leading the way for Anti-Trust Legislation for other states and at the Federal level.  This crucial Bill will level the playing field with small businesses while providing more protections for Workers and consumers.  We applaud the New York State Senate for passing this Bill and urge the New York State Assembly and Governor Cuomo to join an urgent nationwide effort to take back power and control of our communities.”

ALIGN is a long-standing alliance of Labor and community organizations united for a just and sustainable New York.