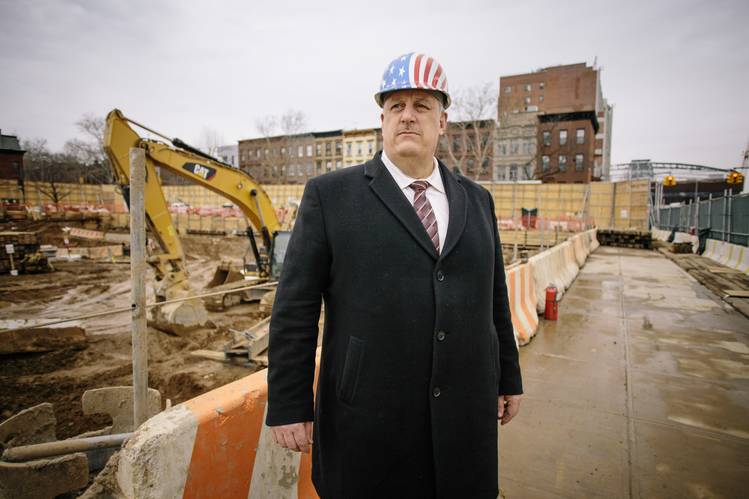 “We’ve been making it clear across the state that wage theft can no longer be tolerated in the construction industry, especially as these Workers are depended upon to build the infrastructure that will be crucial to New York’s economic recovery and future,” LaBarbera told LaborPress. “It’s important that every New Yorker understands what’s at stake - not only the livelihoods of Workers, but also the safety of Workers.”

Earlier this month, the New York State Legislature passed a Union-backed Bill that would hold general contractors jointly responsible for wage theft committed by subcontractors on their job sites.

The legislation is important, LaBarbera says, because Workers robbed of their wages, overtime, and benefits - predominantly Non-Union - currently have “very little recourse,” and it recognizes “the fundamental expectation that honest work should result in honest pay.”

Problems with safety and wage theft often go together, with Non-Union, Immigrant and Undocumented Workers most likely to be the victims, LaBarbera says: “When there are cases of wage theft on a worksite, more often than not, the contractors are operating the project without the well-being and safety of Workers foremost in mind.”

The construction world was reminded of how critical the issue remains last month, when three Non-Union Workers were killed in on-the-job accidents within an eight-day span.

“Each death was preventable, which makes these tragedies even more unacceptable,” LaBarbera told LaborPress. “Construction is a dangerous industry, but with proper safety protocols and rigorous safety training at all jobsites, Workers will be safer and tragic accidents can be prevented.  Anything less is unacceptable.”

The Building Trades Unions have been fighting for legislation to require worksite safety and proper safety training for years, he continued.

“The sooner that legislation that creates and demands accountability from employers in the industry becomes law, the sooner we can rid the industry of bad actors who jeopardize the livelihoods and safety of Workers for their own financial benefit,” LaBarbera says.

The Unions are also working with the City of New York’s Department of Buildings on enforcing safety “across all construction sites in the city,” he adds.

Meanwhile, the state’s April mandate that all Workers on renewable-energy systems of five megawatts or more - which covers all but the smallest wind farms - get paid Prevailing Wage means that growing industry will be a new source of Middle Class careers with benefits, LaBarbera says: “There is immense opportunity in the renewable-energy industry for Members of the New York State Building Trades, and we look forward to continuing to work with elected officials and stakeholders to ensure that family-sustaining jobs are central to this new economic frontier.”

The Building Trades represent more than 200,000 Workers in New York, which makes them, collectively, one of the two largest Private Sector Unions in the state, but LaBarbera believes they also have a duty to stand up for Workers who aren’t Members.

“Our role in the Labor Movement is to ensure that every Worker - no matter their Union affiliation or the project they’re working on - is afforded the dignity, safety and respect that every individual deserves,” he says. “Just a few weeks ago, hundreds of Union Tradesmen and Tradeswomen joined with Non-Union Day Laborers at the State Capitol to demand an end to a Labor violation that often only impacts the Non-Union Workforce, but that is what the Labor Movement is all about.”

To Directly Access This Labor News Story, Go To: www.laborpress.org/wage-theft-can-no-longer-be-tolerated-labarbera-warns/