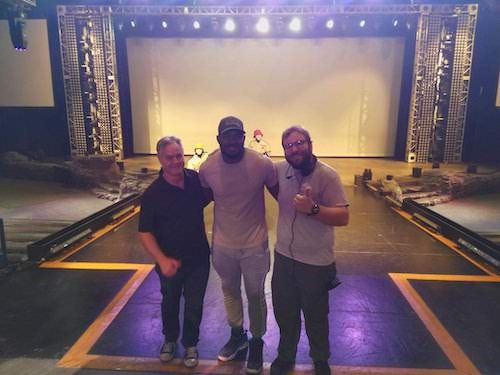 (LOS ANGELES, CALIFORNIA) - The Coronavirus forced millions into unemployment, with many wondering what their next steps should - or even could - be.

"We want to be able to provide help to these guys in any way we can," Business Manager Marc Flynn said. "We know how tough it is out there."

Local 40 Member Rob Siminoski has been with Universal Studios Hollywood for a decade.

The stage manager runs all the theatrical shows at the theme park, including The Waterworld Stunt Show and the Harry Potter-themed TriWizard Tournament and Hogwarts School Choir.

Stage Managers are the show runners and primary point of contact between Labor and management during day-to-day operations, scheduling breaks for other Union Laborers like IATSE (The International Alliance of Theatrical Stage Employees, Moving Picture Technicians, Artists and Allied Crafts) and acting as a liaison between the Union Technical Services Department and other Non-Union contractors.

But despite his 10 years, he's still got a long way to go before he'll accrue enough seniority to get a full 50 weeks of work every year.

During slow months he often has to take outside work managing Non-Union touring shows to make ends meet.

And now, as the Coronavirus had shut down so much of Hollywood, he decided to make a career change, to something still with Local 40 - but with more job security.

"Prior to the outbreak, other (Local 40) Members had encouraged me to look into the Apprenticeship Program," Siminoski said. "It seemed like a great way to learn new, transferable skills and get good Union benefits."

While the Coronavirus slowed the work picture, the Apprenticeship moved forward and Siminoski applied.  "I'm excited to learn the Trade and to work regularly and provide for my family," he said. "It's something I wish I had done much earlier in my life."

Local 40, which was established almost 100 years ago, around the same time as many of the major studios in Los Angeles, has more than 800 Members that work as inside Wiremen, Motion Picture Electricians, HVAC and Sound Workers, Stage Managers, Special Effects Technicians, Audio Mixers and On-Set Air and Power Workers, to name a few of its classifications.

"Some of our Members have won Oscars," Flynn said.

Siminoski is applying to the Inside Apprenticeship, a five-year program with 8,000 hours of on-the-job training and 10 semesters of in-class education.

He and his cohort will also learn about electric vehicle charging stations and Green Energy Micro-Grid Systems, ensuring they'll graduate with skills to match the new technology of the industry.

To Continue Reading This Labor News Story, Go To: www.ibew.org/media-center/Articles/21Daily/2105/210527_Hollywood