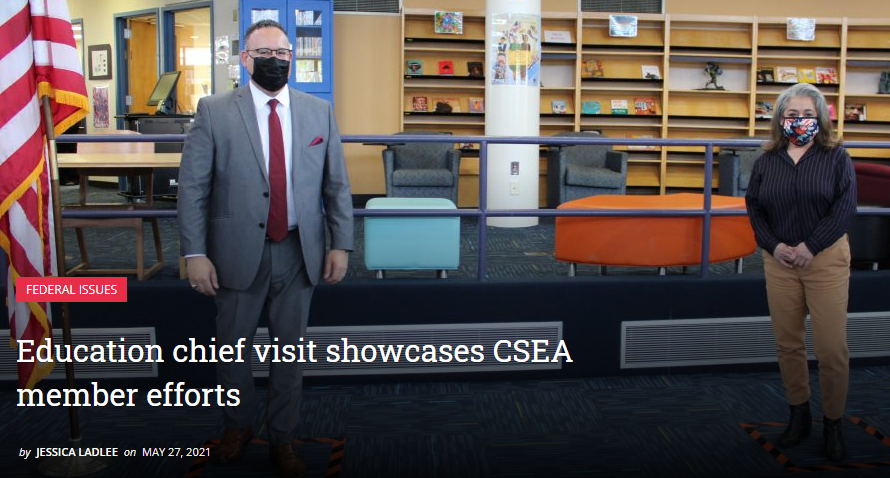 “It was exciting, both that he was coming to White Plains High School and that we were being recognized for this effort in getting our students back in the classrooms,” said White Plains School District Unit Secretary Elizabeth Ramos, who attended as a CSEA Representative. “As Union Members, our power is in numbers.  Using our voices in advocating for Federal aid has made a big difference for schools.”

White Plains School District Unit 2nd Vice President Rudy Rivera, Head Custodian at White Plains High School, took part in a roundtable discussion with Cardona and other district Staffers, where Cardona praised Rivera for the work he and the 18 Custodians working with him have done to get the high school ready for daily, in-person classes.

According to media reports, 70% of White Plains High School students are back in the classroom - five days a week.

For the district’s elementary schools, that figure is closer to 90%.

“It was a privilege to meet (Cardona),” Rivera said. “He said he appreciated the teamwork among the Staff to get kids back in school.  It was great, too, that he walked through the school to meet the Teachers and speak with the students.”

Rivera and the other Custodians in the district’s schools have worked hard making the modifications necessary to get kids back in the classroom, including: Distancing desks as recommended by the Centers for Disease Control and Prevention (CDC) guidelines; and installing Plexiglas barriers and hand sanitizer dispensers.

They use Clorox 360 machines to sanitize rooms several times per week, in addition to daily disinfection efforts.

Ramos said she is proud to be part of a team of CSEA Members that includes Custodians, School Nurses, Food Service Workers and other Workers, who are helping keep the district running during a time period filled with uncertainty.

The fact that Cardona has experience as a Classroom Teacher also heightened the excitement.

“It’s exciting knowing that he visited our district and he was then going back reporting to his boss, the President of the United States, (Joe Biden),” Ramos said. “This put White Plains on the map.”

To Directly Access This Labor News Report, Go To: https://cseany.org/workforce/?p=9923