Amazon Fired Him, Now Heâs Trying To Unionize 5,000 Workers In New York - Christian Smalls âTakes On The Fiercely Anti-Union Colossus, Convinced A Union Of Only Amazon Workers Is The Smartest Way To Rallyâ Amazon Employees

Published Monday, June 7, 2021
by Steven Greenhouse Via The Guardian 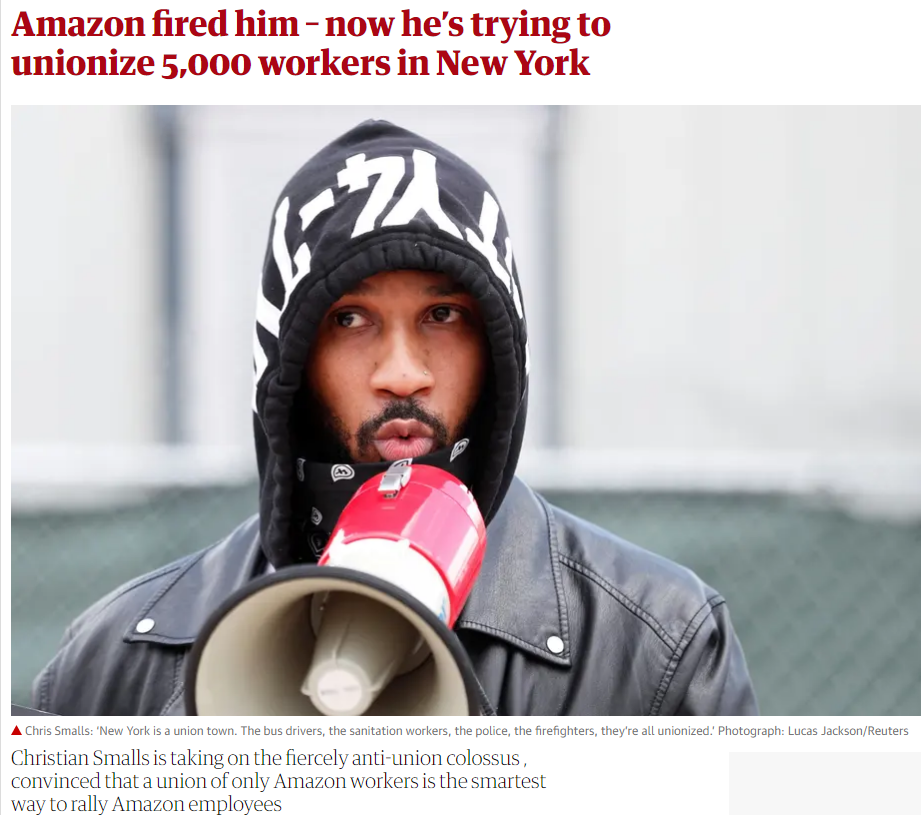 (STATEN ISLAND, NEW YORK) - Christian Smalls has taken on the biggest challenge of his life - still smarting from when Amazon fired him last year, the 32-year-old is spearheading an effort to Unionize more than 5,000 workers at four Amazon facilities in Staten Island, including a giant warehouse.

Smalls is taking a highly unusual route in pursuing this goal.

He’s founded an independent Union, the Amazon Labor Union, convinced that a new Union comprising only Amazon Workers is the smartest way to rally Amazon Employees behind a Union after the crushing defeat of an effort to Unionize an Amazon warehouse in Alabama earlier this year.

“I believe we’ll be successful,” Smalls said. “New York is a ‘Union Town.’  The Bus Drivers, the Sanitation Workers, the Police, the Firefighters, they’re all Unionized.  Everybody is related or knows somebody in a Union.”

But many Labor experts say it’s a long shot, considering that Smalls and his nascent Union have little organizing experience or expertise and are going up against a fiercely Anti-Union colossus with $386 billion in annual revenues.

Smalls’ Union is getting its funding through GoFundMe, collecting just $4,500 so far.

RWDSU President Stuart Appelbaum said: “Amazon Workers need Unions.  I hope that Chris and others around the country will be successful.  We look forward to supporting them.  If Chris runs out of money, we’d support them and not look for anything in return.”

Smalls - who is tall, athletic and affable with a closely cropped beard, says he has learned from the Retail Wholesale and Department Store Union’s (RWDSU) loss in Alabama.

“The fact that we’ve seen what Amazon does gives us an advantage,” Smalls said. “And we learned from the Union’s missed opportunities.  We’re not going to make their mistakes.”

Smalls promises to have a bigger, stronger Workers’ Committee to educate and mobilize Workers to support his Amazon Labor Union.

This isn’t the first time Smalls has crossed swords with Amazon.

Convinced Amazon wasn’t doing nearly enough to protect Workers from COVId-19, whether on Personal Protection Equipment (PPE) or social distancing, Smalls - then an Assistant Manager at the Staten Island warehouse - led a walkout in March 2020.

Amazon fired him that day, saying he had violated social distancing rules.

Several days after Smalls was fired, Amazon’s general counsel mapped out a plan - at a meeting that Jeff Bezos attended - to smear Smalls as “not smart or articulate” and to make him “the face of the entire Union/Organizing Movement.”

“They said they’d make me the whole face of the Union effort against Amazon,” Smalls told The Guardian. “I’m trying to make them eat their words.”

To Continue Reading This Labor News Story, Go To: www.theguardian.com/technology/2021/jun/04/amazon-workers-staten-island-christian-smalls