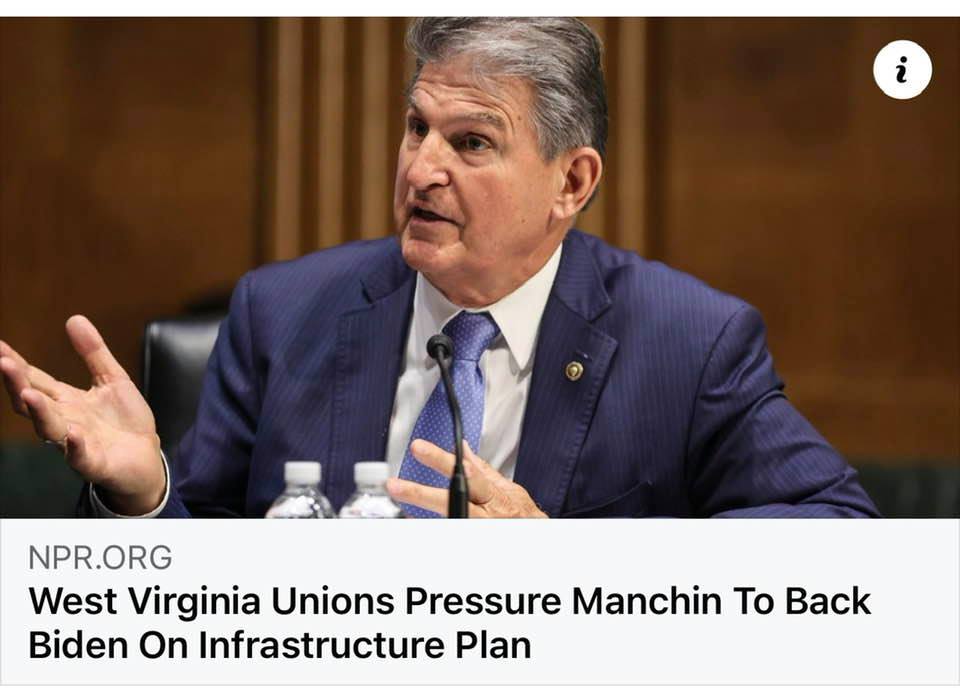 If President Joe Biden's $2 trillion infrastructure and jobs plan is going to become reality, it will very likely need the vote of every Democrat in the evenly divided U.S. Senate.

That simple fact puts a bright spotlight on West Virginia Senator Joe Manchin, a Moderate Democrat who represents a deep-red Republican state - a place that Donald Trump carried in the past two elections by some 40 percentage points.

Manchin's position means he will have a lot of say on whether the package includes everything the Biden Administration wants and on how to pay for it.

And soon after it was outlined, Manchin voiced some immediate concerns.

He said raising the corporate tax rate from its current 21% up to 28% to help pay for the proposal was too much of an increase.

Instead, he suggested a smaller hike, up to 25%.

Right away, it underscored how central Manchin would be to the plan's success.

And Unions in West Virginia, which argue that the future of the state's economy depends on Biden's proposal, took Manchin's line as a cue to mobilize and to start educating their Membership and the general public about what's at stake.

"It's really important to break down the aspects of the jobs plan state by state," said Mary Kay Henry, who serves as President of the two million-member Service Employees International Union (SEIU), who promised to put a special emphasis on Manchin's home state.

The SEIU represents thousands of Health Care Workers who earn minimum wages in West Virginia - Workers who are overwhelmingly female.

A proposed $400 billion would be directed toward the home care industry under the Biden package.

The SEIU estimates that would mean improved pay and benefits and an additional 6,000 jobs in West Virginia, a state with an aging population in need of such care.

Of those Workers, Henry said: "We intend to make sure she is seen by Senator Manchin," adding that the Moderate Democrat must understand home care deserves to be part of an infrastructure plan.

"He needs to vote yes on both rebuilding roads and bridges in West Virginia, but also in investing in the home care workforce in his state," Henry said.

The effort to win Manchin's support is now underway by the SEIU and its allies.

One group, the Working Families Party, is running print and TV ads to pressure the Senator.

It's also hosting socially distanced, live-streamed outdoor concerts under the banner of Jammin' for Jobs.

Working Families Organizer Ryan Frankenberry said you move Manchin by moving public opinion - "by creating awareness, by making it harder for him to say no.  To create the expectation that he must and will say yes."

To Continue Reading This Labor News Report, Go To: www.npr.org/2021/04/23/989469370/west-virginia-unions-pressure-manchin-to-back-biden-on-infrastructure-plan