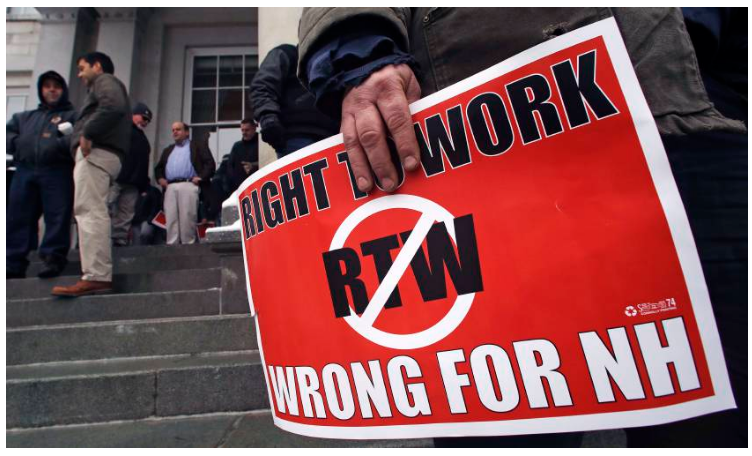 (CONCORD, NEW HAMPSHIRE) - The House defeated a Right-To-Work (for less) Bill late last week by a vote of 175-to-199, disappointing supporters who thought a 2018 U.S. Supreme Court ruling on Mandatory Union Dues would persuade long-standing opponents to back it.

House Members then defeated a motion to table the Bill, which would have meant it could have been subsequently reintroduced.

A motion to postpone the Bill indefinitely passed, 196-to-178, which means the Bill - or something similar to it - can’t be reintroduced until 2023.

State Representative Donald Bouchard, a Manchester Democrat, said the Bill - if passed, would be unfair to paying Union Members by giving those who didn’t pay a free ride.

He said this would ultimately weaken Unions.

“Right-To-Work would hinder Workers who want to come together in Unions from getting enough power to negotiate on an even footing with employers, for better wages, benefits, and working conditions,” he said.

This was at least the 30th attempt to pass a Right-To-Work Bill in New Hampshire in the last 40 years.

One attempt made it through the Legislature in 2011, only to be vetoed by then-Governor John Lynch.

Had Senate Bill 61 passed, Private Sector Unions would have been prohibited from requiring all Employees to pay dues, including those who aren’t Union Members.

The U.S. Supreme Court stopped that practice among Public Sector Unions three years ago in a 5-4 ruling that said requiring Non-Union Members to pay dues is a violation of their First Amendment Right to Free Speech.

That court decision essentially instituted Right-To-Work Rules on Public Employee Unions, including the State Employees Association (SEA), one of the state’s largest Unions.

Although the SEA would not be affected by Senate Bill 61, Union President Richard Gulla was happy to see it fail.

He called the vote “a great win for New Hampshire citizens and families.”

Republicans, who favor Right-To-Work, hold just a 26-seat majority this session, about half of what they held in 2017.

The Bill’s opponents predicted that would almost certainly be too small a margin to pass the Bill.

“This is a bipartisan win,” Gulla said. “Republicans and Democrats joined together to defeat the so-called Right-To-Work-For-Less Bill.”

To Read This Labor News Story In Its Entirety, Go To: https://newhampshirebulletin.com/2021/06/03/house-defeats-right-to-work-legislation/