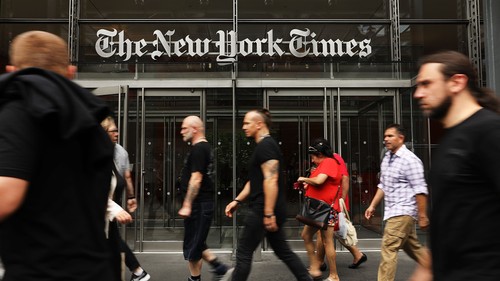 (NEW YORK CITY) - In April, when a group of more than 650 software Engineers, Product Managers and Data Analysts at The New York Times tried to Unionize, leadership not only declined to voluntarily recognize their Union, but began to hold mandatory Anti-Union meetings.

While management, of course, had known about the Union months before it went public, the strangest thing about this, say Times Workers, was how contrary the current approach runs to The Times' own long-held positions on Union recognition - a contradiction the newspaper has not addressed and seems unwilling to.

The effort at The Times is part of a broader wave of Labor agitation in Tech, involving Software Engineers in particular.

At the end of April, NPR recognized a Union of 64 Digital Staffers.

Last year, Tech Workers at Kickstarter successfully Unionized despite a substantial Anti-Union Campaign launched against them.

But the group of nearly 700 Tech and Digital Employees at The Times would, if recognized, be the largest Tech Union so far.

As Author and Tech Labor Expert Ben Tarnoff observes in The Making of the Tech Worker Movement, “tech matters deeply to American capitalism.”

A large body of organizing Tech Workers, then, he adds, “should be of considerable strategic interest.”

On April 22nd, a week after Workers publicly announced the formation of the Times Tech Guild, Times CEO Meredith Levien sent an e-mail to Staff with the subject line: A Note From Meredith: Everyone Should Have a Voice in Representation.

The e-mail broke the news to Guild Members that senior leadership would not voluntarily recognize them - instead, it will probably come down to a National Labor Relations Board (NLRB) Election, in which a simple majority of voters decides the outcome.

“We all share similar goals and vision for our future,” wrote Levien, “but we believe there is a different, and better, way to get there.”

Motherboard talked with several Times Workers and it's obvious that all of them genuinely admire The Times’ mission and leaders and their direct managers, not all of whom, they say, seem comfortable with Union-avoidance tactics.

However, many tire of the rhetorical contortions deployed by senior leadership to simultaneously justify Union evasion and preserve, as Tarnoff put it on a phone call: “A patina of liberal respectability.”

“It’s disappointing and it’s hypocritical.  There was even a ‘New York Times’ editorial piece, from 2007 about recognizing Unions when they have a majority of people signing cards in support,” said Nozlee Samadzadeh, a Software Engineer who works on Oak, the Text Editor used by Times Journalists.

Samadzadeh echoed a point many in the Guild voice: The Times has, in the past, advocated for exactly the opposite of its current approach.

“In general, the reason for companies refusing voluntary recognition is because they want to try to dissuade people from joining,” said Goran Svorcan, a Software Engineer working on The Times' Crossword App.

To Continue Reading This Labor News Story, Go To: www.vice.com/en/article/88nxv3/new-york-times-workers-are-fed-up-with-the-new-york-times-union-busting?fbclid=IwAR3W6ZZmGmofjvexRgdB157feHIFUM4Asg2gM6qgpeqS0PM81T4k7F5CPxM