Gig Workers Of The World âAre Unitingâ â So, âHow Do You Beat Companies That Can Spend Hundreds Of Millions Of Dollars To Exempt Themselves From Labor Law?â Iâll Tell You: âYou Organize!â 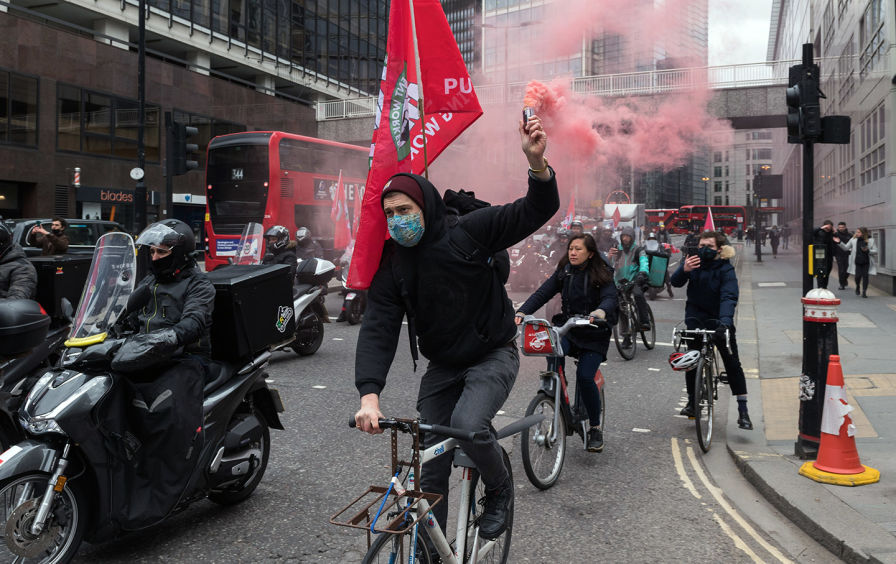 Deliveroo was supposed to be the biggest IPO on the London Stock Exchange in a decade.

Despite having never turned a profit, the company was praised by UK Chancellor Rishi Sunak as a “true British Tech success story” as it sought a valuation of $12 billion.

But the sunniest of platform capitalist narratives can’t overcome a simple reality: Workers fight back.

A business model based on exploitation has made Deliveroo the world’s most-protested App-based platform.

Now, even investors are realizing the power of Worker Organizing.

Amid protests by Deliveroo Couriers around the world and with Drivers’ UK Supreme Court victory over Uber in February, three of the UK’s largest asset managers pulled hundreds of billions out of the IPO, citing concern over Deliveroo’s Labor practices.

On March 31st, as its Riders took the streets in a work stoppage organized by the Independent Workers Union of Great Britain (IWGB), Deliveroo’s ballyhooed offering collapsed, falling 31% in its first minutes of trading - and continues to trade well below its initial price.

Workers face significant challenges in building collective power in an industry that depends on their atomization.

So, how do you bargain for more when your boss is an App, you’re paid by an algorithm and you haven’t met your Co-Workers?

How do you beat companies that can spend hundreds of millions of dollars to exempt themselves from Labor Law- as Uber and its Silicon Valley allies did by passing Prop 22 last November?

Despite the obstacles, Gig Workers across the world are beginning to answer these questions.

As the platform companies push back against organizing efforts, Workers are finding each other and developing a trans-national network of resistance over forums, group chats and video calls.

The protest against Deliveroo’s listing echoes another milestone two years ago, when Rideshare Workers orchestrated a worldwide strike that helped turn Uber’s IPO into a historic flop.

Nicole Moore, a Driver in Los Angeles who helped organize the work stoppage, told me how activists in different countries coordinated on-line, studying financial news together to anticipate the stock announcement - ahead of time.

The result - a walkout across 25 cities in six continents that grabbed headlines two days before Uber’s listing - was a breakthrough moment, Moore said: “At that point, the global conversation about these companies was, ‘These innovators, should we invest in them?’  And we put Drivers’ voices on the big screen to say there’s nothing innovative about paying people no money, to outsource your fleet costs to people making less than minimum wage.  And that this was a worldwide problem.”

To Continue Reading This Labor News Report, Go To: www.thenation.com/article/activism/global-gig-worker-organizing/