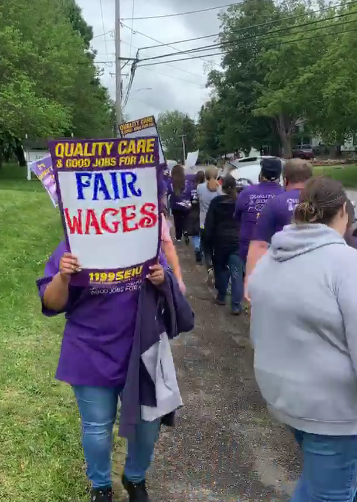 Last month, the Unionized Caregivers - represented by 1199 Service Employees International Union (SEIU) United Healthcare Workers East, voted unanimously to picket their employer after a tentative agreement for a new contract could not be reached.

1199 SEIU Members work as CNAs, Activities Aides, Dietary Workers, and in Housekeeping and Laundry.  The Employees have been working without a contract since April 30th when their one-year extension expired.

Workers say wages are not competitive and short staffing is a problem.

“We want a fair contract,” Amy Sanchez, a Certified Nurse Assistant (CNA) who’s worked at the Niagara County Nursing Home for 14 years, said.  “We work very hard to take care of our residents even though we constantly work short staffed.  We deserve to be taken care of too!”

“Thirty-five cents will help pay the rent.  Caregivers are fighting for living wages in a small community against a downstate ownership group with a large portfolio of nursing homes.  We are fighting for better wages.  The wages they are offering aren’t good.  New CNAs are coming in and looking at their paychecks and then they leave,” Sanchez said.

“Workers are trying to provide quality care for their residents and care for their families.  We can’t raise a family on what we make.  We don’t want a revolving door.  We want our elderly residents to feel safe and to know who is caring for them,” CNA Krista Burnett said.
Negotiations are now set to resume on June 16th, the Union said.

1199SEIU United Healthcare Workers East - the largest and fastest-growing Health Care Union in the United States whose mission is to achieve quality care and good jobs for all, represents more than 400,000 Nurses and caregivers throughout the States of New York, Florida, Massachusetts, New Jersey and Maryland, and in Washington, D.C. and Florida.