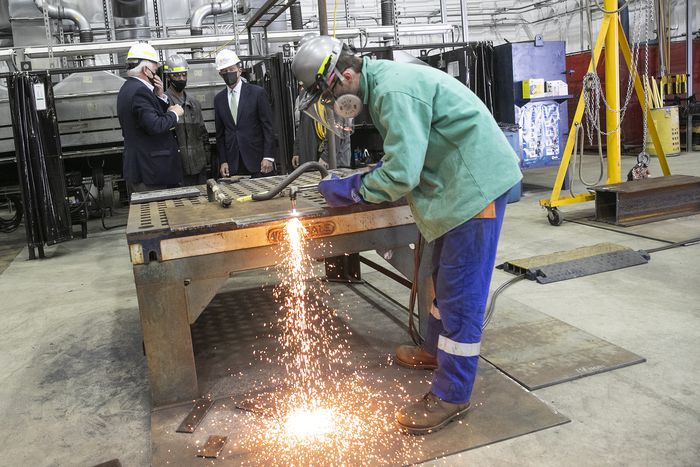 (PHILADELPHIA, PENNSYLVANIA) - Bryan Robinson gets up at 4:30 a.m. to be at Philly Shipyard by six o’clock sharp.  His task for the day, in the apprenticeship Program he started last month: cutting or welding, or some of both.

When everything’s going right with the welding, “it can be very soothing,” Robinson, 26, said. “It’s you and your material, (heating up the metal until it turns cherry-red, then introducing high-flow oxygen to start the welding process).  Looking at your finished work, it’s that feeling of having built something from scratch.  I felt like this is my career.  I can look forward to retiring here.”

Philly Shipyard has been coming back to life as contracts for national security multi-mission vessels, first announced in spring 2020, filled the company’s bare order books.

The average cost for each ship runs about $300 million. So far, the shipyard is set to build four training ships for state maritime academies.

Then in late April the company won a $720,000 grant from the U.S. Maritime Administration to support an Apprenticeship Program.

The Training Academy Facility opened its doors in May to the first class of Apprentices - a dozen of them - since the last group completed the three-year program in early 2018.

U.S. Sen. Pat Toomey (Republican-Pennsylvania) recently congratulated Staff on the turnaround from when the shipyard’s prospects were in doubt.

“Now ships are getting built, Workers are on the job and the next generation of Workers are getting trained and getting on the job experience,” Toomey said during a visit to the Training Facility. “They’ll have a tremendously valuable set of skills that will last them for their entire career.  There’s going to be a lot of work for years to come.”

More than 400 Employees are back to work at the shipyard, up from about 200 in January.

The company told The Inquirer earlier this year that it aims to employ nearly 1,400 in 2022.

The Apprentices are paid Employees from the first day, with retirement benefits and time off.

They’ll get 6,000 hours of on-the-job training and more than 500 hours of technical training through Delaware County Community College.

After graduation, the Apprentices will have earned Journey-Worker status, along with 22 credits toward an Associate’s Degree at the community college.

“This is my first and only job where I even had the option for benefits,” said Robinson, who had previously transported vehicles for rental car companies.

Last year he enrolled in an introductory welding course at All-State Career School in Essington, Pennsylvania, which is also how he learned of the Shipyard’s Training Program.

The 12 Members of the new class range in age from 18 to mid-40s and were selected from 150 applicants.

The shipyard plans to bring in two more classes of Apprentices this year.

To Directly Access This Apprenticeship And Training Labor News Story, Go To: www.inquirer.com/business/philly-shipyard-new-jobs-apprenticeship-program-maritime-administration-grant-20210603.html