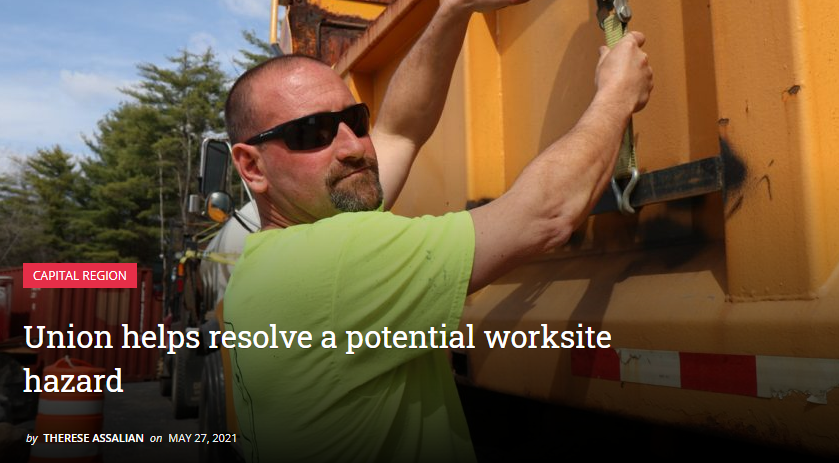 Grates attached to the back of plow trucks, meant to sift out chunks of salt or sand, could only be installed, removed or maintained by Workers climbing on them.

This practice was causing injuries.

Highway Department Workers initially approached management to resolve the problem, but department managers were not receptive to the Employees’ safety concerns or suggested solutions - so Unit Members turned to Warren County Local President and Town of Queensbury Unit President Susan Sheehan, who reached out to CSEA Occupational Safety and Health Specialist Brian Pomeroy.

Pomeroy agreed the issue was serious and needed to be addressed.

When attempts to work with management were unsuccessful, Pomeroy filed a complaint with the New York State Public Employees Safety and Health (PESH) Bureau, which oversees safety regulations at public sector workplaces.

Sheehan, who was present for the on-site PESH investigation, recalls dismissive language from the town’s highway superintendent, who tried to blame Employees for their injuries, stating they would not be hurt if they weren’t “an idiot.”

Earlier this year, PESH cited the town with a “serious” violation and issued an abatement date of February 24th (2021).

The town was informed that from the date of the initial inspection forward, any Employee injury could be met with criminal assault charges.

On March 2nd, less than a week from the town petitioning PESH for an extension of the ordered abatement, another Employee was injured.

“I reached out first to Brian Pomeroy about this Employee injury on (March 2nd) and on his advice, forwarded an e-mail describing the incident to PESH Inspector Sue Blodgett,” said Sheehan.

PESH then levied fines from February 24th to March 15th, the date the town ordered an outside contractor to remove the grates off the site.

The grates will never again be used and an initial Employee suggestion to purchase a safer system to replace the grates will be implemented.

“I am so proud of CSEA for helping these Members attain a safer workplace,” Sheehan said.

To Directly Access This Labor News Story, Go To: https://cseany.org/workforce/?p=9943