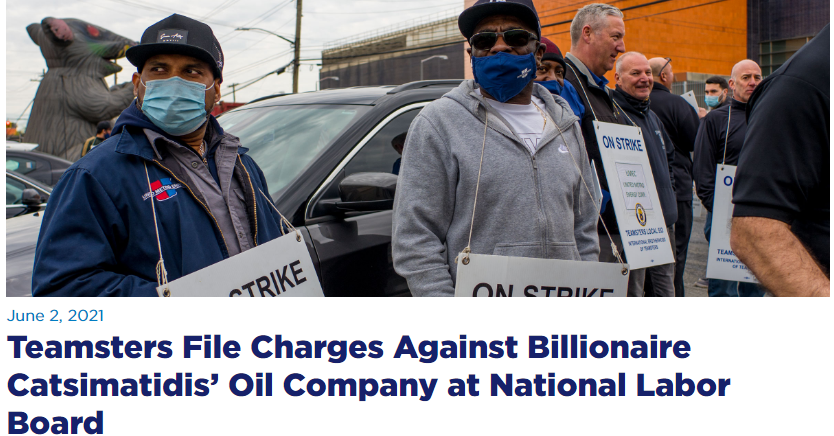 (NEW YORK CITY) - Teamsters Local 553 has filed charges at the National Labor Relations Board (NLRB) against the United Metro Energy Corporation, which is owned by billionaire John Catsimatidis, alleging the company illegally fired, threatened, and retaliated against striking Essential Workers at the company’s Brooklyn Oil Terminal.

The charges, which were filed on May 27th, outline a pattern of Anti-Union actions against Workers that are illegal under the National Labor Relations Act (NLRA).

The charges allege the company: Improperly hired replacement Workers to permanently replace striking Workers, starting with Union Activists, in order to discourage Union Membership: Threatened Workers with the termination of their health coverage for striking or honoring the picket line: Threatened to subcontract out the work performed by Union Workers: Made statements that displayed an illegal Anti-Union animus; and Illegally bargained in bad faith.

The Teamsters-represented Workers have been on Strike since April 19th.

“These Essential Workers, most of them Immigrants and breadwinners for their families, worked through the pandemic and they deserve better than illegal intimidation.  They deserve fair pay and benefits,” Teamsters Local 553 Secretary-Treasurer Demos P. Demopoulos said. “We demand that the government hold the company accountable for violating these Workers’ rights.”

Unionized United Metro Energy Workers have provided gasoline, diesel and heating oil to New York throughout the COVID-19 Pandemic, but are paid much less than Workers at other city oil companies and receive poor medical and retirement benefits.

“I went on Strike for a better future for my family and on the first day of the Strike I got a letter saying I was fired,” said Andre Soleyn, a Terminal Operator at United Metro Energy. “It’s no mystery why they fired me first, because I was the leader of the Union Organizing Campaign.  It turns out that ‘we were essential enough to report to work through the pandemic, but not essential enough to keep our jobs when we asked for a raise.’”

The company’s Terminal Workers, Fleet Mechanics and Service Technicians voted to join Teamsters Local 553 in February 2019, but management has dragged out negotiations for a first contract, Teamsters Officials said.

To Directly Access This Labor News Story, Go To: http://teamsters.nyc/2021/06/02/teamsters-file-charges-billionaire-catsimatidis-oil-company-national-labor-board/