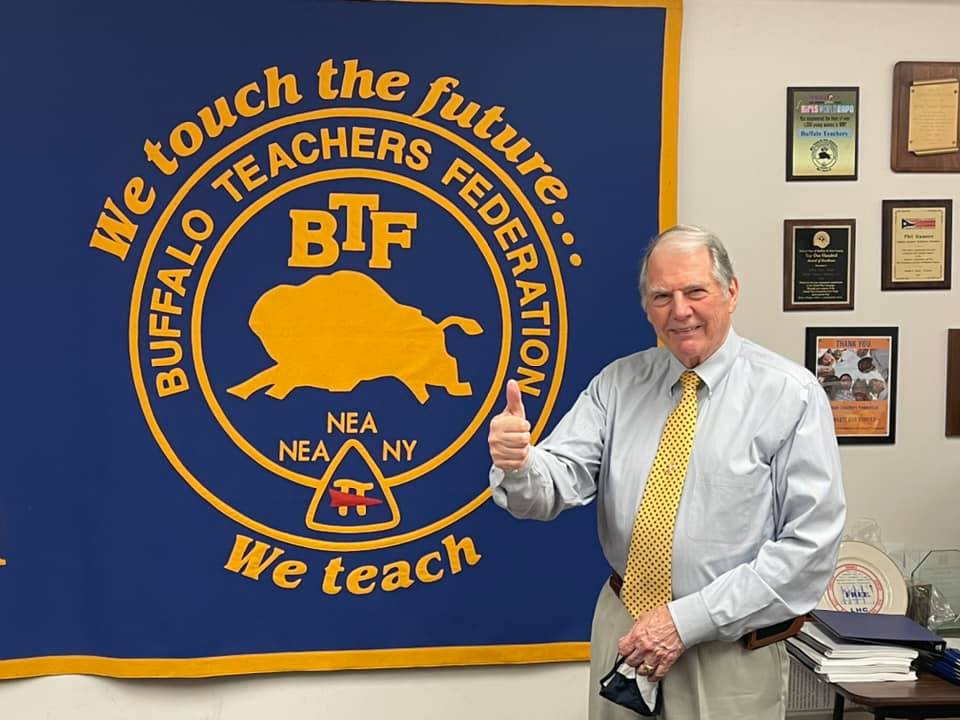 (BUFFALO, NEW YORK) – 1981 - that was the year Phil Rumore was first elected President of the Buffalo Teachers Federation (BTF).  Now, after being re-elected to his 21st consecutive two-year term, Rumore tells WNYLaborToday.com he is “honored” to not only receive the support of his Union’s Membership, but vows to continue the fight to make the lives of both Teachers and the City’s Schoolchildren better in the years to come.

Rumore received 881 votes, compared to challenger Marc Bruno’s 699 - a 56% to 44% final tally in what was a less-than-friendly election, according to the BTF President.  Also re-elected were Becky Pordum as Vice President, Joe Montante as Treasurer and Melinda MacPherson-Sullivan as Secretary.  The BTF represents 3,800 Teachers in the Buffalo Public School System.

“While I ‘wish more’ Teachers would have voted, ‘I’m honored to be selected to represent the most determined Teachers anywhere,’” Rumore (Pictured Above/WNYLaborToday.com Photos) recently told Your On-Line Labor Newspaper at the Union’s Offices on the corner of Porter and Niagara Streets in Buffalo.

“Our Teachers ‘have gone through so much this past year - COVID’s impact, so much was on their minds.’  ‘I will continue doing my best and I am happy Teachers want me fighting for them,’” said Rumore, who will turn a self-described “very young” 79 on June 10th.

“I ‘don’t hold any grudges.’  ‘The bottom line is that I feel good about this election.’  I hope that my actions, my accomplishments (over the years) ‘will give our Members (who did not cast their votes for Rumore) a realization that I should have voted’ for (him),” he continued.

“Many Teachers told me after the election ‘that they thought I would win.’  For the others, ‘I am hoping to win them over.’  ‘If we disagree, then that’s okay.’  But in this next term, ‘I want to get back into our schools more and meet with Teachers,’” Rumore said.

Also on Rumore’s plate is the BTF’s contract with the Buffalo School District (the Union is awaiting the appointment of a Mediator from the Public Employees Relations Board (PERB) to sit in on the new contract negotiations) and the dispersal of New York State dollars into Buffalo’s schools (which is owed “a couple of billion,” according to the BTF President).

“Our relationship with the Superintendent (Kriner Cash), ‘I believe, is good.’  ‘We disagree, but we can talk,”’ Rumore said.  “And our job is to use that (upcoming state and Federal) money (for the good of Buffalo’s schoolchildren - and for Teachers and parents ‘to vote on how it is used’”

Reducing class size is also important, especially in light of the impact the Coronavirus Pandemic had.

“It ‘will take a year to undo all the damage to our kids’ (of not physically being in school for such a long period of time),” he said. “So ‘we’ll be concentrating on that because you just can’t flip on a switch’ (and go back to the way it was before the pandemic).”

City & State said of Rumore: Known as a hard-nosed negotiator and dogged advocate for his Union’s Teachers, Philip Rumore has headed the Buffalo Teachers Federation (BTF) for 40 years.  One of his most recent advocacy efforts was a lawsuit that would have blocked students’ physical return to Buffalo classrooms.  Though unsuccessful on that front, Rumore has also spoken out against the Federal Government’s standardized testing requirement for Grades 3-through-8 during the Coronavirus Pandemic.

But all Rumore wanted to talk about with WNYLaborToday.com was his BTF-represented Teachers.

“They are ‘amazing.’  They ‘taught from home’ (during the pandemic) ‘and many had to deal with their own’ kids at the same time’ (making sure they were properly home-schooled via computer).  There have been ‘so many’ cases (of COVID-19) in the city, ‘so you have to give (those Teachers) credit for moving in the right direction.’  They have their vaccinations and ‘they’ve made no missteps.’”

Sitting in Rumore’s office, one cannot help but be a bit overwhelmed by the many mementos the BTF President has collected over the years involving his hero - Albert Einstein, the German-born Theoretical Physicist, acknowledged to be one of the greatest Physicists of all time.

From photos to statues to toy figures and books, everything Einstein adorns Rumore’s Office.

In the process, Einstein - a Nobel Prize winner, revolutionized our understanding of space, time, gravity and the universe. 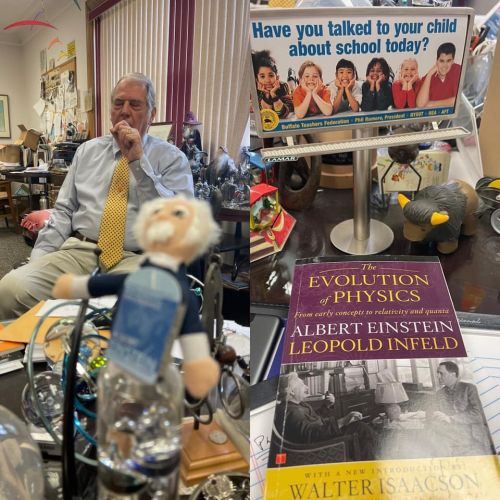 Rumore, a retired Teacher who attended the University of Buffalo after going to college at Cortland State where he majored in physics and philosophy, has been fixated on Einstein since he was in the seventh grade.

“Why ‘was it always at the speed of light?’  ‘And why was it always c-squared?’  When I was in my senior year at Cortland, ‘I considered matter and energy as the origin of everything.’  A Teacher ‘agreed’ this was (a) ‘good’ (theory).  ‘It’s something I want to continue (researching in the years to come),” he said.