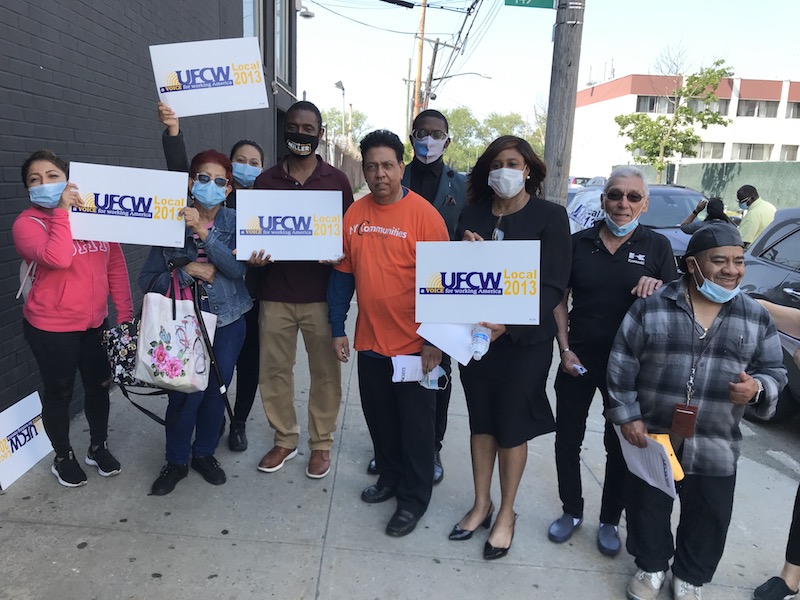 (NEW YORK CITY) - Like most businesses in travel, Airline Caterer DO & CO laid off Workers when the COVID-19 Pandemic hit in early 2020, but United Food & Commercial Workers (UFCW) Local 2013 negotiated a deal that Employees recalled within three months would keep all their seniority and benefits, and later got that extended to seven months.

But Workers recalled after that were out of luck.

The company brought them back as new hires, deleting all the seniority and vacation time they had previously earned.

“I got recalled, and I started as a ‘new’ Employee,” Bibi, an Equipment Packer who preferred not to give her last name, told LaborPress during a protest held late last week by about 35 Workers and supporters outside a company facility near John F. Kennedy International Airport.

But the biggest loss, she added, was that she had enough time on the job to get three weeks of vacation each year.

Now, she’ll have to work another year to get back to one week.

“It wasn’t our fault, the pandemic,” she says.

The more than 500 Workers at the facility, in an industrial area of road-sand piles and hotels converted into homeless shelters wedged between the airport and the Belt Parkway, were laid off early in the pandemic, according to the UFCW.

Some were recalled before the agreement was expired, but so far, 43 Workers have been stripped of their seniority, UFCW Local 2013 Field Director Francine Streich, as will others recalled in the future.

Originally a Chef, Herrera had worked at DO & CO since 2018.

He turned down the company’s initial recall for him to come back as a Cleaner, but took the second, as a Packer, he told LaborPress.

He’s making about the same as he was before the pandemic, $18.25 an hour, but lost the annual week of vacation he’d earned.

“Nobody could’ve imagined just how long the impact on this pandemic would have on the country and the world,” UFCW Local 2013 President Louis Mark Carotenuto said in a statement. “DO & CO needs to restore the SENIORITY of each and every recalled Worker who was laid off as a result of the COVID-19 Pandemic and they need to do so NOW!”

The company, he added, was doing the recall “in a way that not only takes advantage of these Workers - it kicks them while they’re down!”

To Continue Reading This Labor News Report, Go To: www.laborpress.org/airline-caterer-uses-pandemic-to-strip-seniority-from-laid-off-workers/