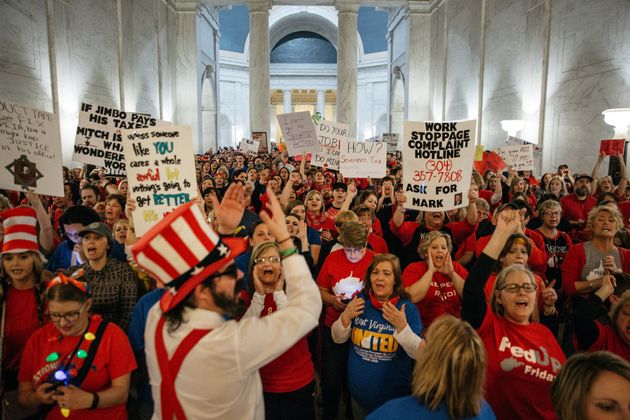 (CHARLESTON, WEST VIRGINIA) - In yet another battle seeing Unions defending their Members and themselves against continued Right-Wing assaults from coast to coast, West Virginia Unions have sued the GOP-dominated State Government there for illegal retaliation against Unionized Workers by banning automatic dues collection from those Workers’ paychecks.

The suit, led by the West Virginia State AFL-CIO, says HB2009, the so-called “Paycheck Protection” Act, violates due process and the state constitution.

It’s also retaliation from Right-Wing GOP Governor Jim Justice, who is a billionaire and the state’s wealthiest person.

Paycheck Protection, which Unionists call “paycheck deception,” is one of a horde of Anti-Worker Anti-Union measures enacted in Republican-run states.

Many of them are designed to, as one Right-Wing Leader once told the British press, to “defund the Left.”

And many, including Paycheck Protection, were also crafted by the American Legislative Exchange Council (ALEC), a secretive cabal of corporate interests and Radical Right Legislators, who meet to scheme ways to impose their agenda on the rest of the U.S.

The suit was filed in late May in Kanawha County Circuit Court in the State Capital and alleges the law “selectively prohibits the long-standing” - 50-year - ”practice and contractual rights of Public Employees and their employers to have dues automatically deducted.”

It is a “legislative animus” against Unions from the heavily GOP State House and Senate drove HB2009.

The ban also makes no sense in the workplaces both statewide and in its 55 counties, school boards and other Unionized public agencies, such as fire departments.

“This cooperative practice” of automatic dues deductions “reached by verbal or written agreement” between Unions and agencies “demonstrates the collaborative relationship” between the two, the suit says.

The law “selectively and discriminately prohibits paycheck deductions for Public Employees and their Unions, a practice that has gone on for more than fifty years without a problem, while still allowing hundreds of other paycheck deductions to remain in place,” West Virginia State AFL-CIO President Josh Sword said in a statement.

“This is still America, and we should not have our freedom attacked and we think this is an attack on our freedoms to spend our money how we want to spend it,” added American Federation of Teachers (AFT) West Virginia President Fred Albert.

To Continue Reading This Labor News Story, Go To: www.peoplesworld.org/article/west-virginia-unions-sue-state-for-attacking-unionized-workers/