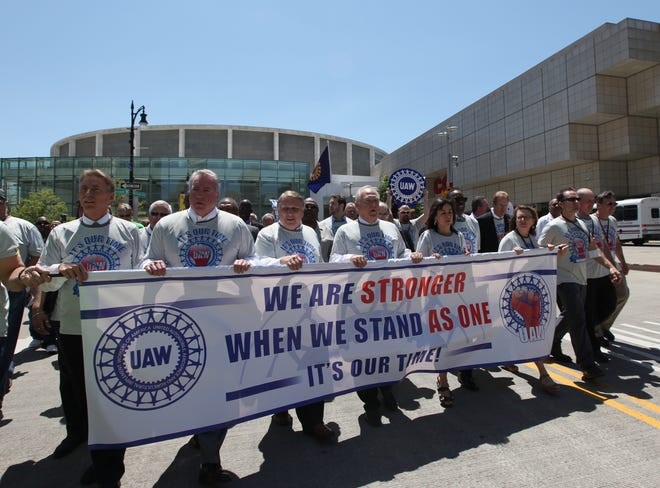 “If they choose the low road, we’ll fight,” Cindy Estrada, UAW Vice President and Director of the Organizing Department, told the Free Press this week.

At issue in the new plants, which are under construction and are joint ventures that aren’t automatically UAW-represented, is a process that would allow Workers to check a box on cards to allow them to organize, versus a drawn-out, traditional vote process.

The UAW prefers the simplified process because a vote allows for counter-campaigning the Union views as unfair.

The outcome of organizing the plants will carry far-reaching consequences for future Electric Vehicle Workers, a point fueling the UAW's sense of urgency for this upcoming battle.

GM and its South Korean Battery Partner LG Chem are building two new battery cell plants: One in Lordstown, Ohio, which will start operations in the first quarter of 2022 - and the other in Spring Hill, Tennessee that will begin operations in 2023.

GM has said it will collectively hire about 2,400 Workers at the two plants.

But because the plants are part of GM's joint-venture with LG Chem, called Ultium Cells LLC, those new hires will not fall under the UAW's present contract with GM, forcing the Union to organize those Workers.

GM has said the Workers will vote on a Union and management won't interfere with the Union's organization efforts - but no formal neutrality agreement has been drawn up.

Such an agreement would be beneficial to the UAW's organizing efforts, Labor experts say.

The UAW has a big ally: President Joe Biden, who has supported a transition to electric vehicles with proposed Federal incentives and a call for high-paying Union jobs in the sector.

The UAW says neutrality is not enough because it still forces a vote through a National Labor Relations Board (NLRB) process that is "flawed," Estrada said in an interview.

"My experience has been when management says they’ll stay out of it, there is plenty of room for others to get in it," Estrada said.

Widespread hiring at the plants has not yet begun.

An hourly worker at a GM Engine Plant currently can earn more than $31 an hour, Estrada said, versus what's expected to be a $15 to $17 an hour wage.

GM can still "take the high road and say, 'We’ll have card check, management neutrality and we will make these high-wage jobs,'" Estrada said. "If they choose the low road, we’re going to fight very strongly against that and so will our Workers and our future Workers because it’s bad for Workers, it's bad for the country and it's bad for the environment.”

To Read This Organizing Labor News Story In Its Entirety, Go To: www.freep.com/story/money/cars/general-motors/2021/05/13/uaw-gm-union-battery-plants-lordstown-spring-hill/5038103001/