USW/WNY Labor Actions - ATI In Lockport & Unifrax In Tonawanda: âItâs A Fight For The Next Generation Of Workersâ As Steelworker Members Walk The Picket Lines To âMaintain Their Benefits & Fend Off Managementâs Two-Tier Way Scaleâ 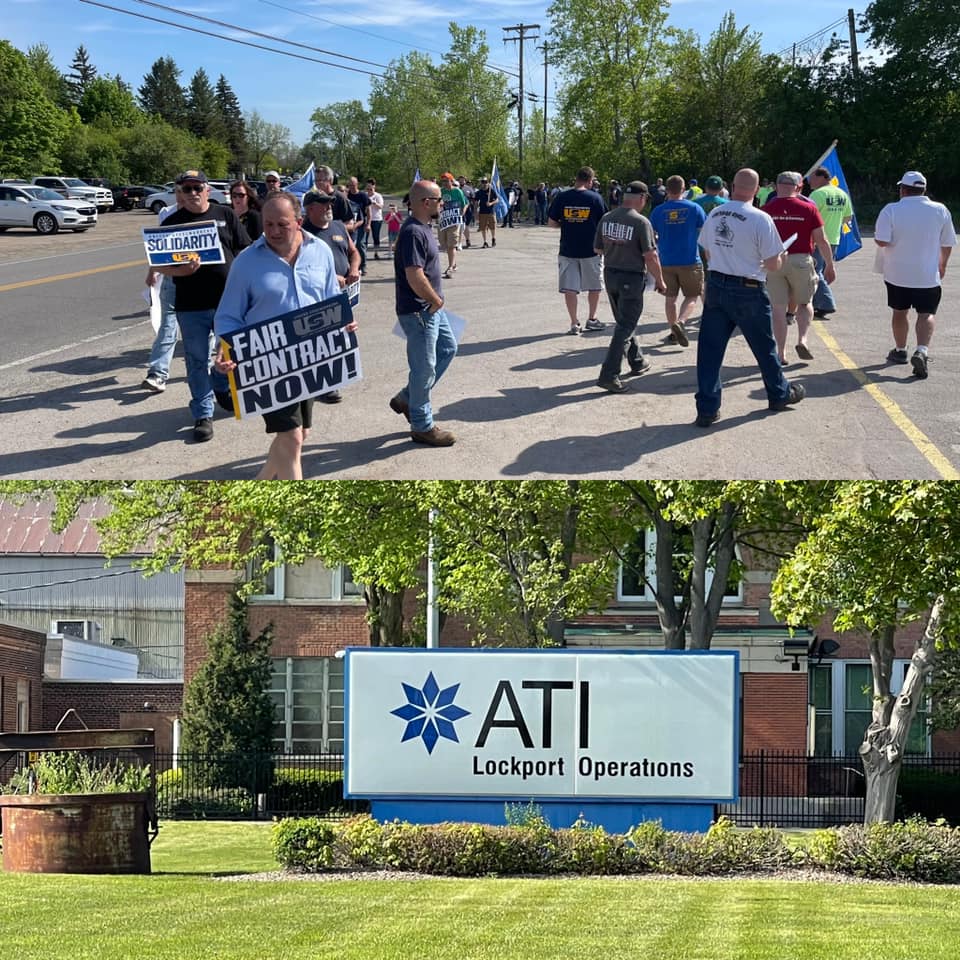 WNYLaborToday.com’s Editor’s Note: Pictured above, United Steelworkers (USW)-represented Employees of ATI Technologies Incorporated in Lockport, New York picket outside the company’s Western New York Plant on Thursday (May 20th), where they have been on Strike since March 30th.  (WNYLaborToday.com Photos)

(LOCKPORT, NEW YORK) – United Steelworkers (USW) International Vice President David McCall, who made the three-hour drive from Pittsburgh to join USW Members walking picket lines in Lockport and Tonawanda on Thursday (May 20th), did not hesitate when answering WNYLaborToday.com’s question of what specifically are these two job actions about?

“These are the ‘real’ issues: Health care and a two-tier (wage) system,” answered McCall (Pictured Below/WNYLaborToday.com Photo) after speaking to striking USW-represented Workers on the picket line outside ATI Technologies Incorporated’s Lockport Plant. 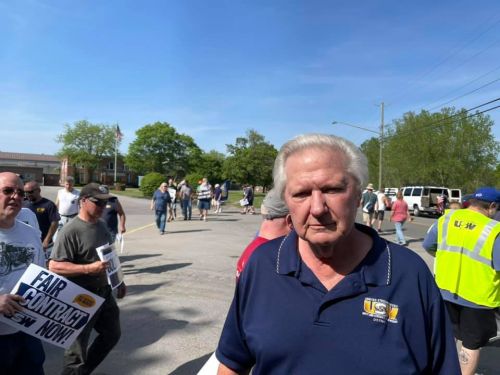 “But this fight ‘really began in (2015-2016) when (ATI) locked us out.’  ‘They’ve been profitable and they’ve closed some operations and they are going to continue to be profitable over the next four years.’  They have ($600 million) ‘in cash’ and ($380 million) ‘in liquidity’ as of the Fourth Quarter (2020).  ‘But they want us to change our health care (which will also negatively impact as many as 4,000 ATI/USW-represented Retirees) and pay premiums, even when we’ve proposed a wellness program for our Members that will guarantee savings to our health care costs.’  They said they’d ‘take it, but still make our Members pay,’” he said.

Thirty-eight USW-represented ATI Workers in Lockport started their Strike on March 30th after their Master Contract expired on April 28th.

Since that time, negotiations have continued, stalled and then resumed. 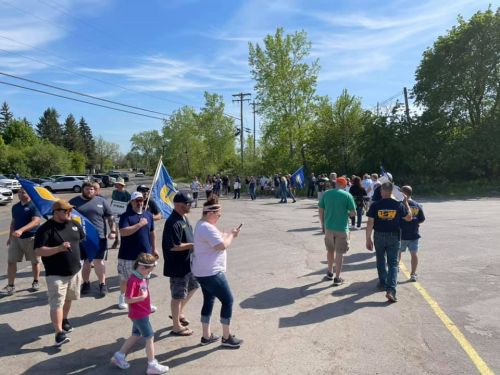 In fact, McCall headed back to Pittsburgh shortly after speaking with WNYLaborToday.com to take part in a negotiation session that was scheduled for today (Friday, May 21st), which was to be overseen by a Federal Mediator, a request made by the USW.

“I ‘don’t know,’” McCall said when asked what he expected to encounter during today’s bargaining session with ATI Representatives.  “This is ‘about a fair and equitable’ contract.  We have a ‘reasonable’ proposal on the table ‘that they should accept.’  ‘But they only seem to care about their stock price and (management’s) own stock buybacks.’” 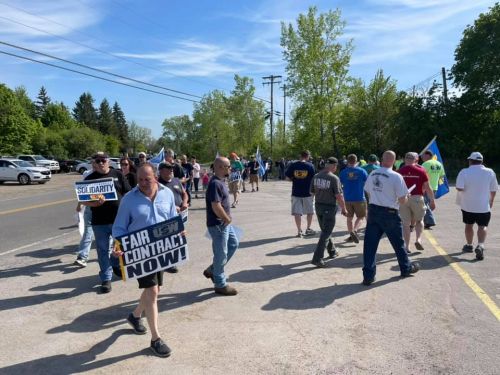 The USW-represented ATI Employees are back on the picket line, just five years after the company locked out its then 2,200 Union-represented Workers at a then 12 plants in six states for six months before agreeing to a new four-year agreement in 2016. 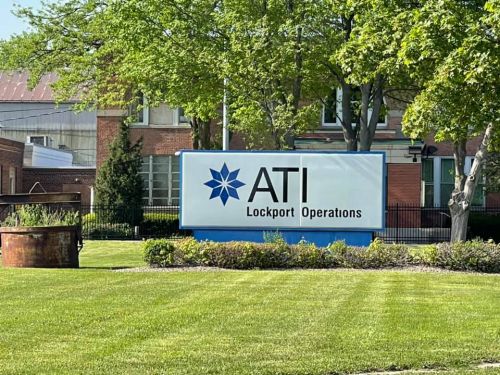 Meanwhile, current morale on the line with those ATI Members in Lockport has been good and was lifted, USW Local 9436-7 President Mike Swan said, by McCall’s appearance.

“It’s a ‘morale booster for both USW Units’ (at ATI in Lockport and at Unifrax in Tonawanda).  Our International ‘is showing us their support as we struggle through these times.’  Our people are (angry).  ‘It’s a concern when you’re back out here after four short years,’” Swan said. 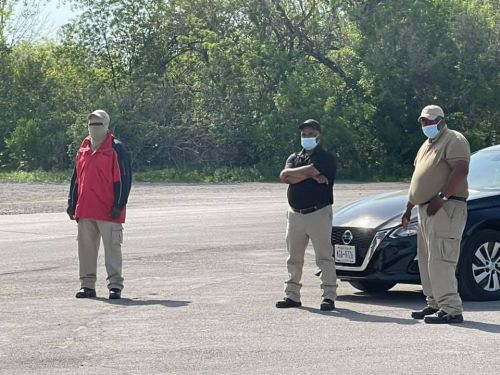 Under a sweltering 90-degree sun, several dozen ATI Employees picketed outside the Lockport Plant under the watchful eyes of a three-man ATI Security Team, including one mystery guard who wore a long-sleeve jacket, a hat and a pull-over mask, leaving only his eyes to be seen through an open slit in the front (Pictured Above/WNYLaborToday.com Photo).

It was, in a word, strange.

“You ‘have just got to laugh,’” Swan said of the masked guard.  “He ‘must be a local guy who doesn’t want to be recognized.’” 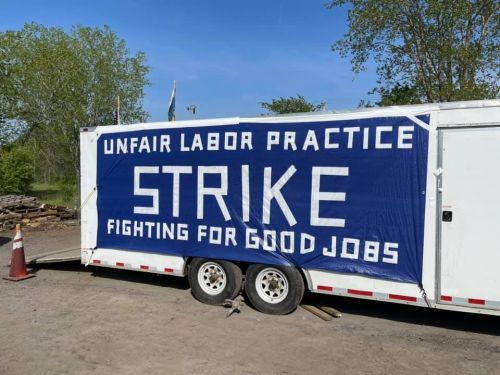 Meanwhile in Tonawanda, USW-represented Local 4-2058 Workers employed at Unifrax voted 133-to-23 to go out on Strike earlier this week in an effort “to take care of the people who will be coming after them,” USW District 4 Sub-Director Jim Briggs said.

A couple of hundred of Unifrax’s USW-represented Employees have continued to make specialty fiber and advanced materials used by the auto industry during the Coronavirus Pandemic - and in the process a number have tested positive for COVID-19, with “some becoming pretty ill.

“It’s a ‘messy situation because this company wants to break the Union,’” said Briggs, who brought area Labor Leaders up to date on the Unifrax situation earlier this week during the Niagara-Orleans AFL-CIO Central Labor Council’s monthly meeting in Niagara Falls.

“They are ‘bringing in scabs’ (to do the striking Workers’ jobs).  ‘This will be a tough battle, but we will not let them just walk over us,’” added Briggs, who serves as the Labor Council’s President.

(For More On This Labor News Story, Read WNYLaborToday.com’s May 2nd Report, Headlined: “Pretty Much - Unifrax Doesn’t Care” - USW Local President Says Workers Are “Running The Tonawanda Plant As More Management Leaves” The Company, Which The Union Says Is ‘Stonewalling Its Attempts’ To Negotiate A New Contract At www.wnylabortoday.com/news/2021/05/02/buffalo-and-western-new-york-labor-news/pretty-much-unifrax-doesn-t-care-usw-local-president-says-workers-are-running-the-tonawanda-plant-as-more-management-leaves-the-company-which-the-union-says-is-stonewalling-its-attempts-to-negotiate-a-new-contract/)