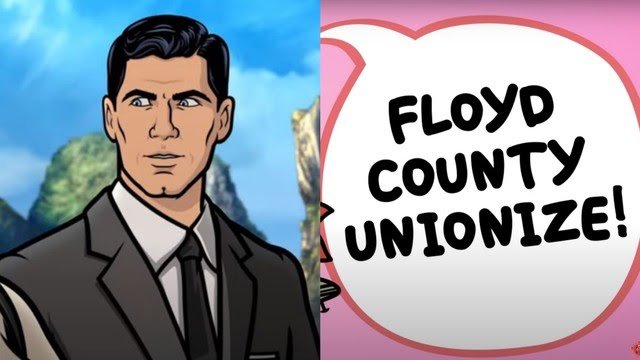 In the first season of the popular animated TV series, Archer, Employees at the Intelligence Agency ISIS discuss Unionizing for better pay and benefits.

"Deep down, we all know we're being exploited," one Worker says in an attempt to agitate reluctant colleagues.

The episode is an homage to the Labor Movement, with references to Socialist Union Organizer Eugene V. Debs and jabs at Union Busting employers.

Their boss, Malory Archer, isn't pleased when she learns Workers have decided to Strike for a cost of living adjustment.

She describes picketing outside the office as “entitled crap," mocking her Employees: "'I can’t make ends meet,' 'I'm on food stamps,' 'my child died because I couldn’t afford new bone marrow.' Just me, me, me, me, me."

In an ironic turn of events, Employees at Floyd County Productions - the animation studio behind Archer, are now Unionizing.

Floyd County Productions, which has regularly touted progressive values, has not recognized the Union, and the Union says that the company has hired a Union-Busting Firm, has held a mandatory Captive Audience meeting during work hours, and, according to a charge against the production company filed with the National Labor Relations Board (NLRB), has "implemented a policy requiring Employees to obtain management approval for any media publications or social media postings regarding their employer."

The charge states that this policy was implemented "in retaliation for its Employees engaging in Union Organizing."

Employees are Unionizing with the Communication Workers of America (CWA).

A letter written by Mesha Mainor, a Georgia State Lawmaker, noted that "a majority of Employees have chosen to be represented for purposes of collective bargaining by the Communication Workers of America."

Mainor also noted that Floyd County Productions "refused to cooperate with (the) Card Check process," a step that is taken in the voluntary recognition of a Union.

In a statement to Motherboard, Floyd County Productions denied it was trying to bust the Union but did not explain why it has not recognized the Union.

The campaign follows a high stakes Union drive at an Amazon warehouse in Bessemer, Alabama, where management engaged in a full-blown Union Busting Campaign and successfully crushed a Union drive.

But unlike the Amazon drive, the majority of Workers have publicly pledged their support for the Union.

And elected officials and politicians in Georgia, including Stacey Abrams, have written to Floyd County Productions CFO Matt Thompson, asking him to voluntarily recognize the Union.