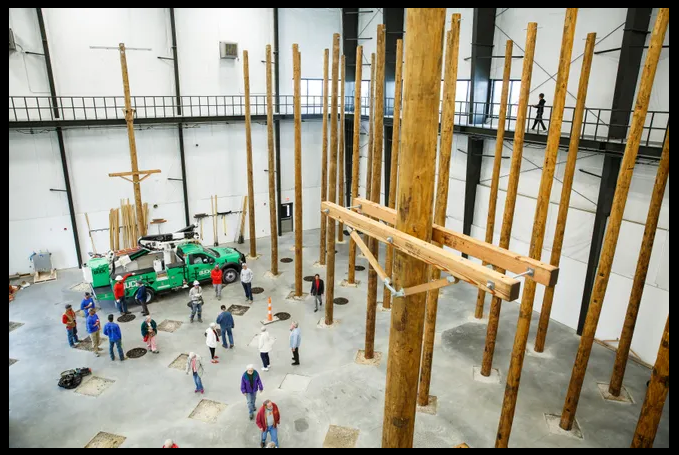 A grand opening of the $13.5 million facility drew more than 250 guests, according to Robby Foxen, the Training Program's Executive Director.  The group included Electrical Work Industry Professionals from Missouri Valley and others in the industry, like the CEO of the National Electrical Contractors Association (NECA) and several Vice Presidents from the International Brotherhood of Electrical Workers (IBEW), Foxen said.

Professional and Apprentice Linemen gave demonstrations on how to climb a utility pole on practice poles in a large training room, while others were available throughout the building to answers questions about the program and the equipment in each room.

"It was really good to see everyone's reactions.  This is, like, the first main event where we've seen our Industry Professionals from all over the country right here, and it was neat to see their reaction and their feedback," Foxen said.

The training program started moving into the new facility in mid-December, when the six-month training classes for Trainees and Apprentices started, he said, but many of the facility's planned events were canceled due to COVID-19.

"We're getting, finally, to where all the Apprentices are going to get to come into this new facility for the very first time," Foxen said. "We bring in a new group of apprentices every week - anywhere from (40 to 60)."

The facility had been planned for city's industrial park since before 2019.

While the program had a presence in Indianola before, the new facility will consolidate other facilities from around the country and be central to Linemen in training in Iowa, South Dakota, North Dakota, Nebraska, Wisconsin, Missouri and Minnesota.

Indianola City Officials, including City Manager Ryan Waller, have touted the facility as a sign of the city's future economic growth.

"(Missouri Valley) is a great asset to the region, to the state and the entire community," Waller said.

Zach Moran, an Apprentice Lineman from Monticello Minnesota who's been in the training program since 2018, when the Missouri Valley program was located on North 14th Street, said he's only trained once so far in the new facility - but said it's already impressed him.

He said Apprentice Linemen are told the training takes about four years, but that the timeline is actually based on how many hours of training they complete.

"It's a really good Trade - great benefits, awesome work," he said. "I love being outside, so it's perfect for me."

To Continue Reading This Apprenticeship And Training Labor News Story, Go To: www.desmoinesregister.com/story/news/local/indianola/2021/05/15/indianola-missouri-valley-line-constructors-apprenticeship-training-facility-opens/4922142001/