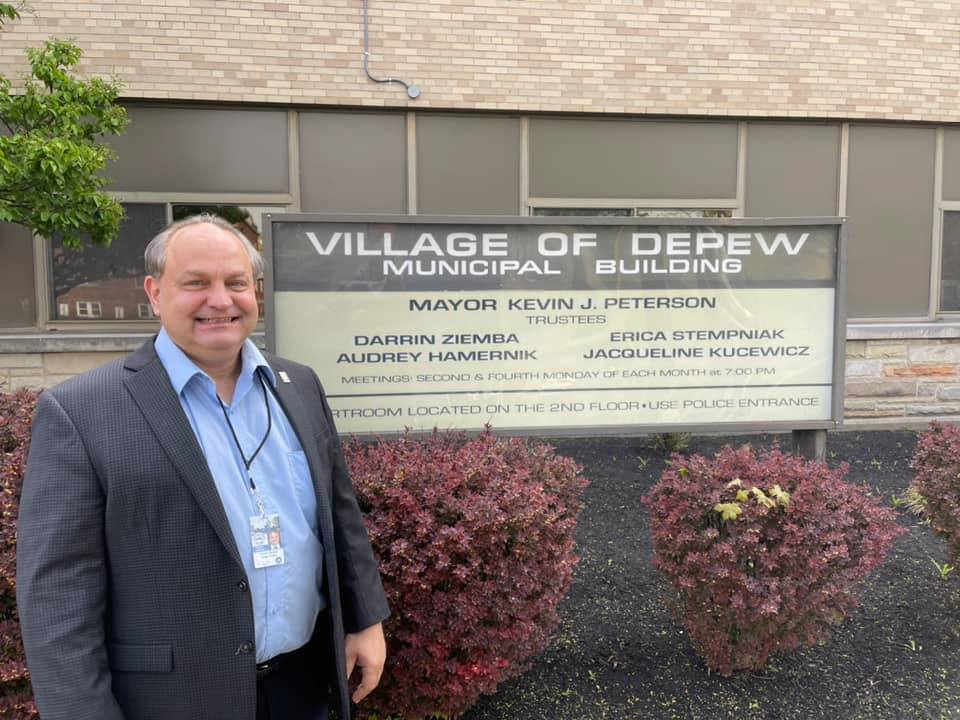 WNYLaborToday.com Editor’s Note: Pictured above, Teamsters Local 264 Recording Secretary and Business Agent Darrin Ziemba stands in front of a sign outside the Village of Depew’s Municipal Building, his name prominently displayed on it.  Ziemba won election to the Trustee seat in March, then successfully battled and recovered from COVID-19.  Now he’s on the job, doing the people’s business in this Suburban Buffalo Community.  (WNYLaborToday.com Photos)

(DEPEW, NEW YORK) – For years now, when anyone would run into Darrin Ziemba walking a picket line, they would ask how he was doing - and every time, it was a sure bet the Teamsters Local 264 Recording Secretary and Business Agent would respond with: “Kicking ass for the Working Class!”

Well, earlier this year, this dedicated Union Official and Member decided to go the distance when the 25-year resident of the Village of Depew made a decision to run for a Village Trustee spot that had opened up.

Back in March, Ziemba told Your On-Line Labor Newspaper: “People ‘asked me why’ I wanted to run, especially after January sixth (the day of the Capitol insurrection in Washington, D.C.).  We have ‘such a political divide and I hope through my leadership we can stop this divide, because we must work together.’  ‘Some people don’t want to take on another burden, I get that, but I like to lead by example and if we all didn’t run, then you wind up getting people who don’t advocate for Working People.’  If I am ‘blessed with this opportunity to work for (the residents), I will work hard for (them).’  I ‘want to get the residents involved (in their government) and make it easier for them to use because it’s their tax dollars that are being spent.’”

Well, the 51-year-old Ziemba won, then was sworn in - and the day after, he was diagnosed with COVID-19.

Now fully recovered, Ziemba recently sat down with WNYLaborToday.com over breakfast to talk about his four-year term, his recovery from the Coronavirus and what he’s encountering now that he’s serving his constituents in this Suburban Buffalo Community. 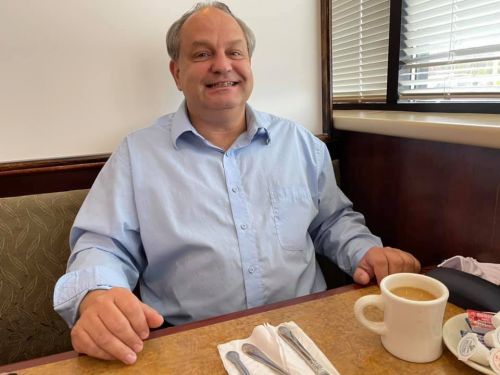 “I ‘want to be an advocate for Working Class people and I want to let the Workers (of this community) that have their back,’” Ziemba said.  “Now, ‘I’m just trying to catch up.’  I’ve been put on the Disaster Preparedness and Public Safety Committees, and on the Public Works and Solid Waste Committee.”

The Village of Depew has about 15,000 residents, but only two-thirds, Ziemba said, are registered to vote - and less than 1,000 came out for the March Election, a number the Teamster said was impacted by the fact that the voting public - believe it or not, was unaware there was an election for Village Trustees - and it being an off-year election with no major races.

“The Mayor ‘wasn’t up for election’ and a lot of (candidates) ‘just didn’t want to go door-to-door because of COVID,’” added Ziemba, who credited his “good team” - including Amalgamated Transit Union (ATU) Local 1342’s Ran Giza, who helped him get the necessary amount of signatures to get on the ballot.

The Teamsters International also underwrote the cost of a campaign flier for Ziemba, who won the seat by a margin of just 34 votes.

But two days after being sworn in to office on April 5th, he was diagnosed with COVID, which had him quarantined alone at home for about 2.5 weeks.

“I was ‘tired all the time and I was very weak,’” Ziemba, who also serves as an Executive Board Member of the Buffalo AFL-CIO Central Labor Council, said.  “I ‘live alone, but my two brothers and my Co-Workers were always dropping off food for me at my front door.’  They’d ring the door bell and I’d get up and get it.”

Now, Ziemba is getting used to his new Village Trustee job - taking part in regular Zoom meetings with other Village Elected Officials and doing his best to do what needs to be done as everyone still deals with the Coronavirus and the impact it has had on the daily work routine.

Ziemba has spent the past 33 years of his life in the Labor Movement and comes from a Union Family.  His father was a Member of the United Steelworkers (USW) and his mother served as a Steward at the old Hearthstone Manor as a Member of the Hotel Workers Union back in the day.

“I have ‘no problem’ (telling Elected Officials) that our Public Workers ‘aren’t making enough,’” said Ziemba, who has negotiated contracts over the years for Teamster-represented Public Workers and Police Officers.

Ziemba tells WNYLaborToday.com he can relate to their struggles, adding: “While ‘we have to do better for these people, we have to justify the numbers.’  I’ve also served on a non-profit board, ‘so I know what it means to watch dollars and the budget.’” 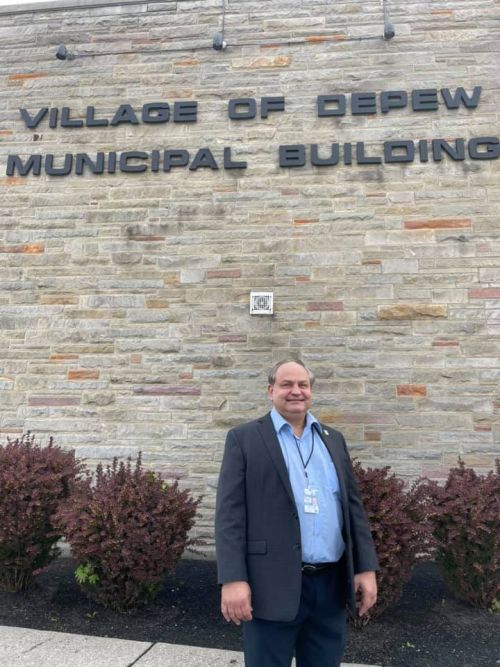 Asked whether more Union Leaders and Members should seriously think about making a run for public office with the goal of being an advocate for Working People, Ziemba answered: “I ‘definitely would.’  For those who are ‘on the fence, I would ask that they reach out to me.’  ‘But, this isn’t for everyone.’  It’s a ‘different game, but you can do it.’  ‘But one thing is for sure, you have to listen to what people are saying.’”

Asked if the process he went through was worth it, Ziemba replied with a smile: “I’ll know that ‘at the end of my term’.  ‘I’m still getting my feet wet.’”