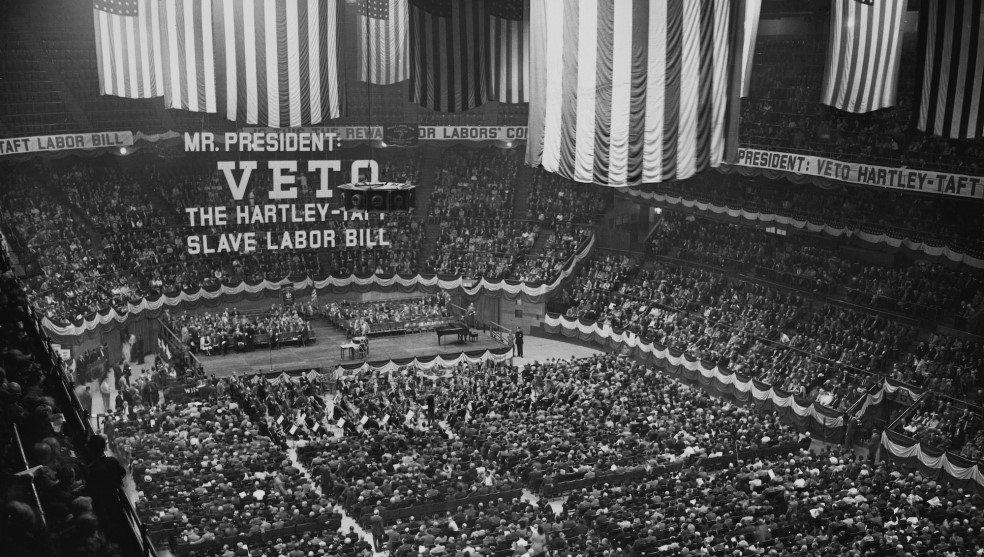 In 1947, when Republicans took control of Congress for the first time since the Great Depression, they immediately set out to weaken Labor Unions.

The Bill they drafted provoked sharp condemnation from Democrats: Adam Clayton Powell Jr., the first Black Congressman elected in New York, compared it to slave labor and said it could “just as easily have been introduced in the Reichstag in the days of Nazism at its worst.”

The next day, the House passed the Bill with overwhelming support from Republicans and Southern Democrats.

The Senate quickly passed its own version.

President Harry Truman vetoed it, calling it a “shocking piece of legislation.”

But it became law when the Senate joined the House in overriding his veto.

The law, known as Taft-Hartley, after its Republican lead sponsors, read like a wish list from the corporations who’d helped write it in response to a wave of strikes seeking higher wages.

Among many other attacks on Labor, it gave companies the “free speech” rights they now use to force Employees to attend Anti-Union Propaganda Sessions, banned secondary boycotts - in which unions refused to work with companies whose Workers were on Strike, and allowed states to pass Right-To-Work (for less) Laws, which deprive Unions of dues from any Workers who don’t want to pay in.

At its core, the law was a repudiation of the landmark National Labor Relations Act (NLRA) that Congress had passed in 1935 to encourage collective bargaining.

In the 73 years since, no major Pro-Union Legislation has replaced it.

Had no Immigration Laws been passed since the 1940s, Western Europeans would still be given priority access to the country and Asians would be banned outright from becoming citizens.

Without Civil Rights Legislation since then, segregation would still be legal under Federal Law.

Looked at from that perspective, it’s not so surprising that Amazon managed to crush a recent Union Organizing Drive in Bessemer, Alabama.

But now, after a string of Democratic Presidents over the decades with strained relationships with Organized Labor, there’s a self-proclaimed “union Guy” in the White House.

A Bill that would undo much of Taft-Hartley (and go much further) passed the House in March.

The Protecting the Right to Organize Act (PRO Act) has 47 supporters in the Senate, up from 42 in the last Congress.

It almost certainly won’t become law in its entirety as long as the filibuster exists, but it may be possible to enact some of its provisions through the budget reconciliation process, which requires only a bare majority.

After three-quarters of a century of frustration for Unions, Labor is finally getting closer to receiving a boost from Congress.

When Franklin Delano Roosevelt took office in 1933, the rights of Workers trying to organize were severely limited under Federal Law - the result was that only about one in 10 Workers belonged to one.

To Continue Reading This Labor News Report, Go To: www.motherjones.com/politics/2021/05/labor-law-is-stuck-in-1947-its-no-surprise-companies-keeps-winning/