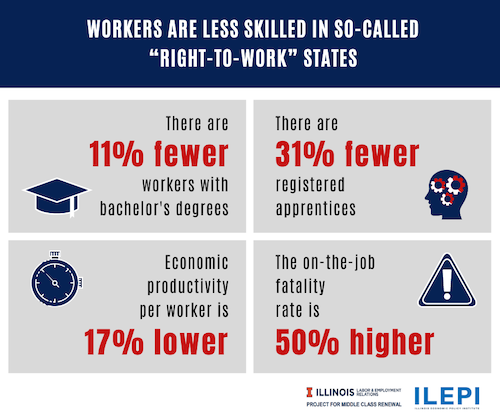 Long-shot efforts to roll back Right-To-Work (for less) Laws in Michigan and Virginia aren't likely to level the playing field for Working People this year, but a new study provides fresh ammunition for Pro-Union Lawmakers in the fight for repeal.

The study, released earlier this year by the Illinois Economic Policy Institute and the Project for Middle Class Renewal at the University of Illinois at Urbana-Champaign, lays out how, on a number of metrics, states with Right-To-Work Laws come up short.

From lower wages to less community engagement, states with these deceptively-named laws are failing Working Families.

Researchers looked at data dating back to 2008 to determine the impact of Right-To-Work Laws on state economies and Worker well-being.

What they found paints a bleak picture.

The 27 U.S. states that have enacted Right-To-Work Laws saw slower economic growth, lower wages, higher consumer debt, worse health outcomes and lower levels of civic participation than states that do not have such laws.

"This new study shows what we've known all along, that Right-To-Work doesn't, in fact, work," said International Brotherhood of Electrical Workers (IBEW) International President Lonnie Stephenson. "It doesn't help people and it doesn't help states.  Instead, these laws prop up a corporate bottom line - usually at the expense of the Workers that make their profits possible."

That's why Labor-friendly politicians in Michigan, where Republicans control both chambers of the Legislature, and Virginia, where Democrats are in charge but face opposition from the Conservative wing of their caucus, are pushing to repeal the laws and return their states to what the study refers to as "free collective bargaining" status.

Prospects for actual repeal this year are dim in both states, but legislation has been introduced, and supporters of repeal are pointing to many of the statistics cited in the report.

According to the analysis, Right-To-Work states have 3% lower hourly wages on average, 5% less health insurance coverage and 8% less retirement security.

For Construction Workers, the pay penalty rises to 11%.

Among the report's findings was that Right-To-Work states have 31% fewer registered Apprentices per 100,000 Workers and 50% more on-the-job fatalities.

Right-To-Work Laws may also be hampering efforts to recover from the Coronavirus Pandemic.

States with such laws effectively lower the bar in terms of providing livable wages and adequate health coverage, not to mention safe workplaces - all factors in a state's ability to combat the deadly virus that has claimed more than half a million U.S. lives.

To Continue Reading This Labor News Report, Go To: www.ibew.org/media-center/Articles/21Daily/2105/210510_Perils