A Lookback At The 30th Annual NOLCâs Workersâ Memorial Event: Fighting Like Hell For The Living, Council President Briggs Calls For The Creation Of A Statewide Worker Safety Roundtable With Unions Seated At The Table With Elected Officials 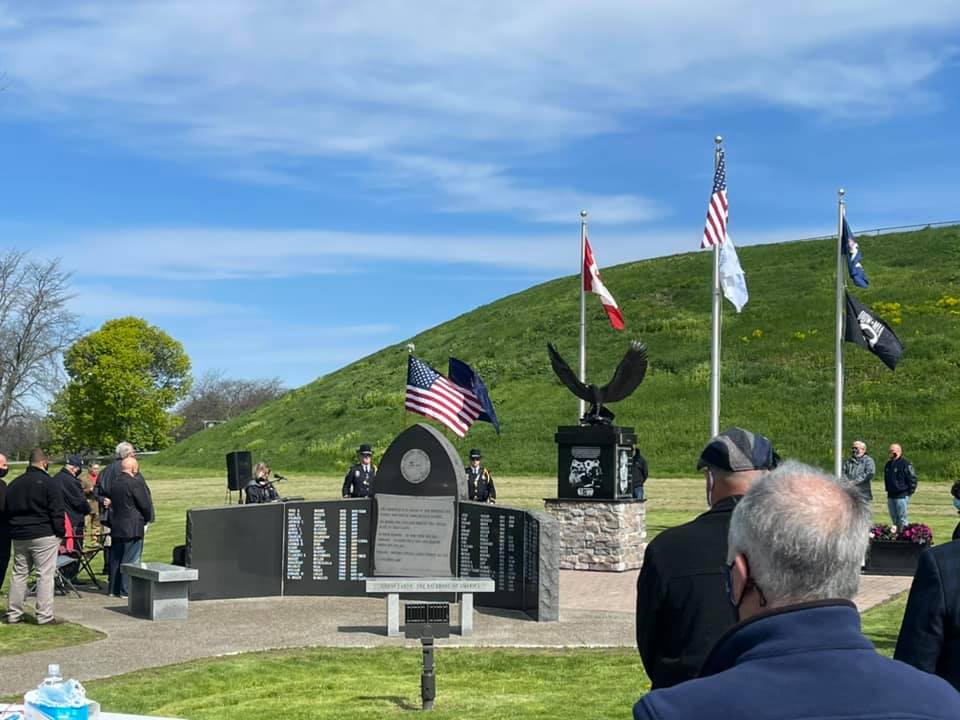 (NIAGARA FALLS, NEW YORK) – During the 30th Annual Niagara-Orleans AFL-CIO Central Labor Council’s Workers’ Memorial event that was held over the weekend in Niagara Falls, Labor Council President Jim Briggs honored those Hero Workers who have been there during the Coronavirus Pandemic by calling for the creation of a Statewide Worker Safety Roundtable that has Organized Labor and its Representatives involved as well.

“We ‘need’ a New York State (Worker Safety) Roundtable and Labor ‘needs to be at that table, because it’s us who work in the plants’ (and in so many other workplace).  There are people who pass legislation and laws ‘they know nothing about.’  ‘The path forward is simple - we need to do the right thing (to protect Workers on the job),’” Briggs told a large and socially-distanced crowd of Union Representatives, Elected Officials and Community Leaders who assembled to take part in the yearly event that was held at Reservoir Park on Saturday (May 8th).

“For sure, ‘this is music to my ears,’” said Morinello, who added that the “focus must be put on Labor and the Skilled Trades, which built the Middle Class.” 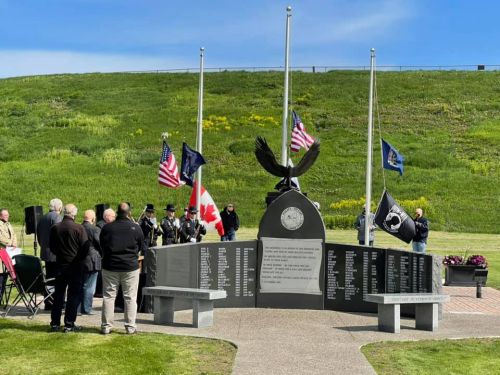 The comments delivered at the event by Briggs, who serves at United Steelworkers (USW) District 4 Sub-Director, came just a couple of days after the release of the National AFL-CIO’s annual report: Death on the Job – the Toll of Neglect, which showed 275 U.S. Workers are killed on a daily basis.

As a result, the National AFL-CIO has called on the Biden Administration to strengthen the U.S. Occupational Safety and Health Administration (OSHA), saying OSHA must be rebuilt after being neglected and dismantled under the previous administration of Republican President Donald Trump - including boosting its ability to seek financial penalties and initiate criminal enforcement proceedings, as well as adding a wave of new OSHA Inspectors.

The need to do so has been heightened by the Coronavirus Pandemic, where - for example, a recent analysis found that there have been at least 563,000 confirmed COVID-19 cases and more than 1,800 deaths in nursing homes across the United States.

Currently, here are 53 names of Workers etched into the Niagara-Orleans Labor Council’s impressive and solemn Workers’ Memorial, a list that fortunately did not grow over the past year, even with the pandemic having so negatively impacted Workers across the board - from Health Care Workers to Grocery Store Workers to County and Town Employees, to name but a few of the many Heroes who have been deemed as Essential. 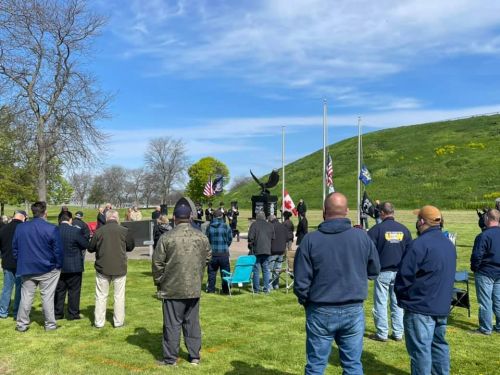 The Reverend Patrick Bradley, who historically opens the event with a prayer and statement, made it a point to single out “all those Health Care Workers who lost their lives during the Coronavirus Pandemic.”

Buffalo AFL-CIO Labor Council President Denise Abbott, who serves as Secretary of the Niagara-Orleans Labor Council and as Health and Safety Director for Communications Workers of America (CWA) Local 1168, became emotional as she addressed those in attendance.

“I want to speak to you today as an Emergency Room Nurse.  With (nearly 600,000 dead from Coronavirus across the U.S.), ‘we’ve been the Essential Workers working to serve others and we say Thank You to all.’  The effect COVID ‘has had on them,’ wearing the ‘same mask for days,’ wearing PPE (Personal Protection Equipment) ‘for an entire’ (12-to-13-hour shift) ‘with no breaks, being exhausted - while at the same time being terrified when you think about what will happen after I leave here?’  ‘Is my family at risk?’  ‘They’ve also suffered from this horrible disease, but they’ve kept going - every day, being there for those who’ve taken their last breath.’  This pandemic ‘has changed everything.’  ‘But I am lucky.’  ‘I have a voice.’  ‘I’m fighting for protections and procedures and to get more supplies.’  And to those (who are Essential Workers), ‘I will forever be grateful.’  ‘But for many others, they do not have a voice and we need to change that.’  ‘We need the PRO (Protecting The Right To Organize) Act, so Workers have the right to organize for a safer workplace.’  ‘The momentum we will build will ensure Workers get home safe at night,’” Abbott said. 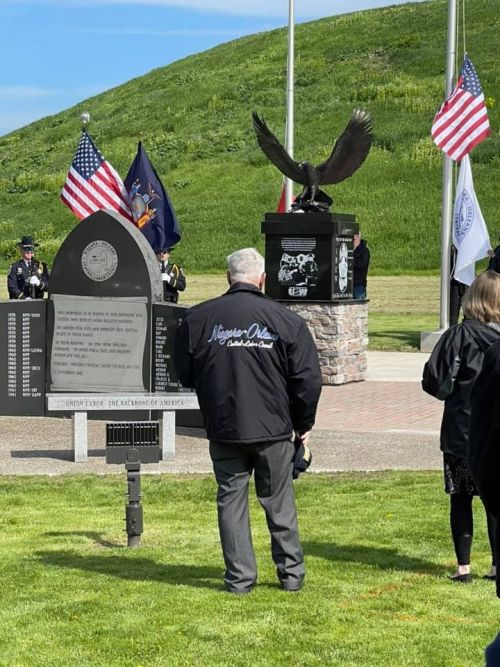 Western New York AFL-CIO Area Labor Federation (WNYALF) President Peter DeJesus also spoke: “We are ‘here to remember’ those Workers ‘who lost their lives and to recommit to fight to ensure that we no longer mourn the loss of yet another life.’  (Organized Labor) ‘knows what needs to be done and we are willing to work to get there.’  ‘The WNYALF is committed to Workers’ safety and we will fight for them.’  ‘We will never forget.’”

Bill Jakobi, who serves as the Niagara-Orleans Labor Council’s United Way of Greater Niagara Labor Liaison, served as Master of Ceremonies.  He said it is the Labor Movement and Unions that have “led the fight for more PPE for its Members ‘and is the key to safe jobs.’”

“Workers’ ‘safety and having a voice on the job go hand-in-hand.’  ‘We will mobilize for the PRO Act for Workers’ rights - for enforcement to make jobs more safe until the promise that was made fifty years ago when the OSHA Act went into law is fulfilled,’” he said. 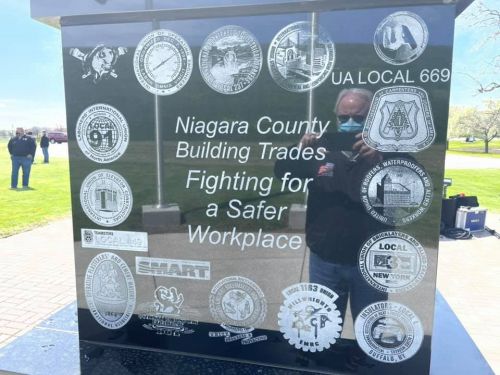 Niagara-Orleans Labor Council President Briggs also said: “What the (Labor Movement) ‘does is important.’  ‘We honor our Brothers and Sisters who went to work and didn’t come home.’  (With the pandemic), ‘our Members were told we had to go to work to make products and move them for those who stayed at home.’  ‘They didn’t get a chance to shelter at home.’  ‘They were absolutely necessary.’  ‘They did their jobs.’  ‘They’ve always been essential.’  These (employers) ‘would not be making money without Unions and the Labor Movement.’  They’ve been called ‘heroes, but they always were.’  ‘They should not see their health plans infused with additional costs.’  ‘We should not be the ones paying for being exposed at work.’  ‘It should not be taken out of their’ pockets.  ‘We were told to do our jobs.’  That’s why we need to form a Workers Safety Roundtable in New York State.  Elected Officials ‘pass legislation that they know nothing about.’  ‘Labor needs to be at the table.’  (Next year at this time) ‘Let’s talk about what we did over the past twelve months and say: ‘Look what we’ve done.’” 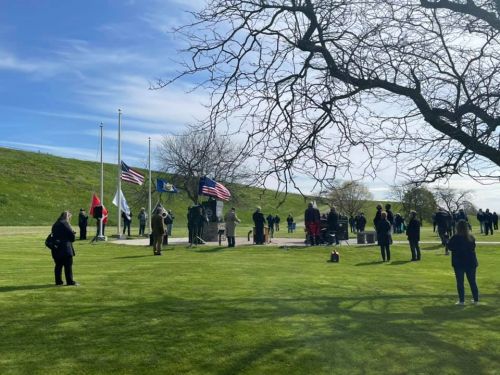