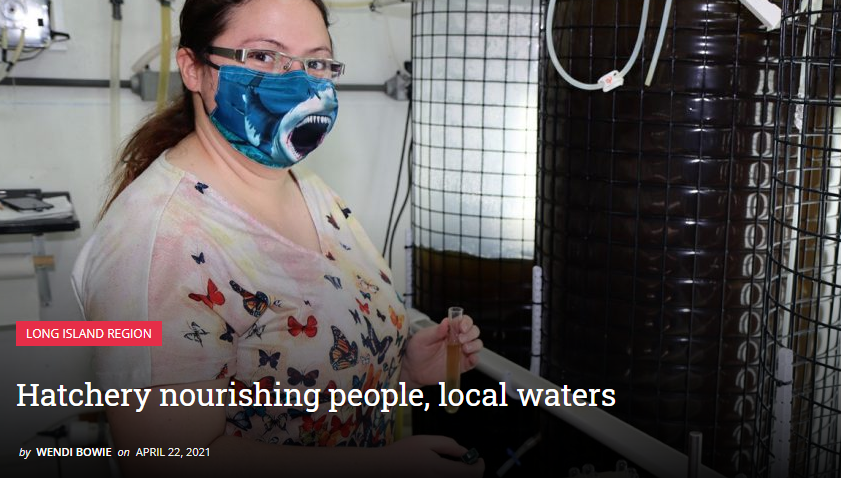 (MONTAUK, LONG ISLAND) - For more than one year, New York has been grappling with the overwhelming impact of the COVID-19 Pandemic.

Some New York City residents relocated to the east end of Long Island to ride out the pandemic, which put a huge stress on local grocery stores that were unprepared for the influx of people, particularly as some stores lacked many supplies during the pandemic’s early days.

Civil Service Employees Association (CSEA) Members working in the Town of Brookhaven’s Shellfish Hatchery have been helping to alleviate that unexpected strain on resources with their work - breeding, raising and releasing shellfish into the bays of East Hampton Township.

“I have friends who are Commercial Fisherman who rely on selling the shellfish they catch in the harbor to feed their families,” Waterways Maintenance Mechanic Jeremy Gould said. “That’s keeping the Baymen economy going as well as supporting the big uptick in recreational Fishermen who are gathering shellfish for dinner.”

The process begins with growing algae and bringing in brood stock (mature shellfish used in aquaculture for breeding purposes) to the hatchery where they will be spawned.

Aside from being used for sustenance, oysters are an important part of the ecological structure because they clean the water.

“Oysters are filter feeders.  They clean the water and make the water clearer, so it’s a better habitat for seagrass, which makes the bays a better environment for other aquatic life that come into the bays,” Environmental Aide Amanda Dauman said. “The better the water quality, the more fish come into our waters, which directly impacts Commercial Fishermen.”

Like other Front Line Workers, CSEA Members working at the Town of Brookhaven Shellfish Hatchery did not have the option of working from home.

Much like Farmworkers, their job entails caring for living creatures that need to be fed and cared for daily.

To comply with social distancing guidelines, all public programs at the facility were canceled, including the Oyster Gardening Program that allows residents to grow their own personal oyster crop throughout the year.

With all of the run-off that is coming from the increased residency on the east end, having a strong oyster and shellfish production program in place has been crucial.

“I don’t know if there’s been any studies, but there has to be a tie between our water quality and the amount of people that have moved out here since the pandemic,” Gould said. “It’s more important than ever that we have this shellfish program to combat the additional strain on our environment.”

To Directly Access This Labor News Report, Go To: https://cseany.org/workforce/?p=9738